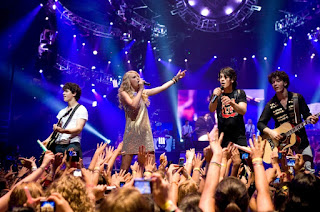 The sole standout in this movie comes from newcomer Taylor Swift, a teenage country singer who is easy on the eyes and ears.  I wouldn't necessarily call her songs "better" than those of the Jonas Brothers, but there is a bit more polish to them and a maturity that was lacking in the rest of the concert, so if she gets a good producer I think we could be hearing some big things from her.

I wrote that paragraph in 2009 when I was a college student writing for The Current at American River College.  I was late for class that day and found out that we had received movie tickets for "Iron Man" and "Indiana Jones & the Kingdom of the Crystal Skull," but since I was late, they were already claimed, and I was tasked with seeing "Jonas Brothers: The 3D Concert Experience" at the Esquire IMAX.  It wasn't a particular good movie (though it wasn't awful enough to earn lower than two stars for me), and I didn't expect anything to leave a lasting impact.  For some reason, Taylor Swift's cameo performance did stand out.  Like I wrote, her songs seemed a little more mature and her voice was easy on the ears.  She was young, sure, but she had potential.  Two months later she would go on to win multiple awards for her album "Fearless," including the Grammy Award for Album of the Year.

Soon she was everywhere and her songs were tearing up the country charts.  Then, the songs were tearing up both the country AND pop charts when her next album came out!  When she released "Red" she was starting to transition away from country music and by "1989" she had abandoned it altogether (winning another Grammy award in the process).  It was satisfying to be validated about being right about someone having the "it" from an otherwise mediocre movie experience.  In the past ten years Swift went from being a small time teenage country star to being the most powerful performer in music.  That is an accomplishment that can not be understated (whether you love her or hate her).  What's more, even though the music has changed, she has made it a point to keep changing and growing as an artist.  "1989" might not sound anything like her self titled debut album, but listening to her stuff in chronological order is to see an artist growing and getting better.  Which is why her latest album feels like such a betrayal on some level. 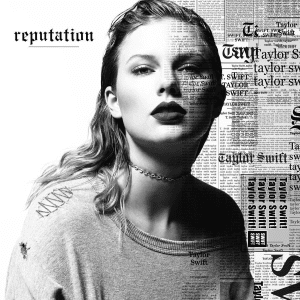 Now, I don't want to pretend like Swift owes me anything.  She doesn't.  She doesn't really owe anyone anything.  Despite customers buying her music and critics giving her positive reviews, the only reason she has the attention is because she produced quality music.  With her new album "Reputation" she has changed her style once more.  While she does not have a Parental Advisory sticker attached, this is her edgiest album yet (a few swear words DO make it in), and the sound of the album is that of what has been dubbed more "mature" pop!  I'm not a music critic (which is why this isn't a conventional review), but I do spend a good amount of time analyzing whether music works good with moving pictures on a weekly basis. I also buy lots of music, and it has been depressing to see artists like Katy Perry, Christina Aguilera, and P!nk not only change their musical style so much, but that they all seem to be changing it to the same boring, tone deaf pop that lacks a hook or melody.

I'm sure you've all listened to some of these albums where there is song after song that threatens to become an actually song, but then stops because the artist thinks their words are more important than the music they are supposed to be singing along with.  I don't understand why pop artists (particularly female ones) feel that they need to take themselves so seriously that the music can take second fiddle to whatever it is they're singing.  Dusty Springfield may have had a powerful voice back in the day, but she wouldn't dream of singing a song unless she could elevate it.  In trying to get away from a "poppy" sound and being taken more seriously, all these artists do is get away from the one thing that made them popular to begin with: Catchy music.  It's frustrating to see someone who used to have a good pulse on what made for good melody forget this so easily.  So the question you may ask is what is the point of all this (and why the title of article)?

The point of this is that I saw something in Taylor Swift when I first saw her.  I vouched for her in a movie that was not going to be loved by many serious music or movie lovers.  A critics reputation is on the line when they do that for a relative unknown.  My career is not going to be affected by her changing her music (and she certainly won't lose any sleep over what I think of her new direction).  I am happy to see she is still experimenting with her music, but the direction of her new album is such a forgettable piece of work that the disappointment is hard to mask.  During one of her songs she sings the now cliché line "Old Taylor can't come to the phone right now...because she's dead!"  While I hope the old Taylor is dead in the sense that I want her to keep reinventing herself, if that means forgetting what made her good in the first place, then she has taken her career in the most disappointing direction possible, and I feel sorry that I gave her my stamp of approval (whatever that means these days).