When is a bad guy not a bad guy? Movies have been asking this question for years, ever since “Citizen Kane” came onto the screen and brought the world (arguably) it’s first ambiguous hero. Years later we have characters that live such seedy lives you can’t help but feel they are supposed to be the bad guy, but the movie claims otherwise. “Biutiful” is the new film from Academy-Award-nominated director Alejandro González Iñárritu, who is known for directing movies with multiple character, multiple settings, and even multiple languages before everything comes together in one neat package. In this regard “Biutiful” is different in that it largely follows one character: Uxbal (Javier Bardem) who seems to be living on the edge of life when the film starts. 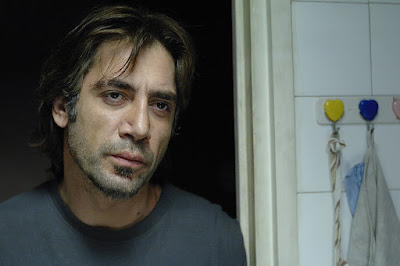 It’s reveled first that he is a drug dealer and has cancer. He doesn’t come off as particularly nice either, so we in the audience don’t feel much sympathy for him. He’s so good with a needle that he even takes his own blood sample when the new nurse can not. From there he goes to meet an African friend of his to warn him not to sell drugs on a certain street the police have deemed off limits. He then goes to visit a Chinese business man who counts on him to provide him with workers he can use to sell pirated DVD’s and fake purses. Then he goes home to his children, who he loves but has trouble taking care of. It doesn’t help that his wife is bi-polar and has promised to clean up her act one too many times for him.  It’s here where I started to loosen up and care for Uxbal. While we never get into his full life the way most character movies do, we learn enough to know that Uxbal IS a good guy! 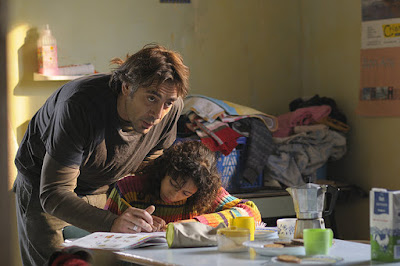 That he does bad things is obviously the result of bad circumstances. When something horrible goes wrong with a group of people he helped exploit, he is furious at himself and contemplates turning himself in. But then...who will take care of his children? He may already be dying from cancer, but what little time left he wants to savor. If there is one thing going in “Biutiful’s” favor it’s Bardem’s strong performance that carries this film. Despite looking like someone we shouldn’t like, we like him because he’s so human it hurts.  It also helps that director Alejandro González Iñárritu is focusing on fewer characters in this film then he has in previous films. It makes the story all the easier to get involved in when the characters are people we care about instead of instruments playing second hand to a larger story arc. 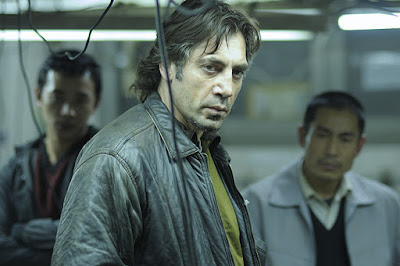 If the film suffers it’s not because of it’s lack of focus, but rather that there’s too much of it. Like his previous films, this movie is almost three hours long, but because there is less going on the running time seems less justified this time around. Where in his previous films three hours were needed to cover all the characters, story twists, and frantic paces films like “Babel” and “21 Grams” needed in order to fully pay off.  However this is a quieter, more relaxed film than those, and it sort of drags at certain parts as a result. A tighter two hour running time would have been more preferable for a story of this nature. Even so though I can’t fault Iñárritu for wanting to break out and direct a more personal film, and Bardem’s is simply too good to miss, so I guess having to sit through a movie that’s thirty minutes longer than needed is a small price to pay. Hopefully when Iñárritu returns to making films for the US he’ll have learned something about tighter editing and deliver a character drama that is worth even more weight in gold.