Many of us have childhood dreams, but few are able to achieve them when we get older.  Kobe Bryant always believed he was born to be a basketball star.  Ever since he was a child this was his one goal in life.  Eventually, he would play the sport that meant so much to him as a child, and would go on to become one of the greatest modern players of our time.  When it was time to hang up his jersey, he penned this poem to the sport, thanking it for all it had done for him, while being sorry he had to leave it behind.  The poem was considered one of the greatest love letters to a profession one could write, and it was prime material to make into a film.  With the help of former Disney director/animator Glen Keane and Oscar-winning composer John Williams, Bryant has been able to visualize his poem in a beautiful six minute short that captures the sincerity of the words and the beauty of the sport. 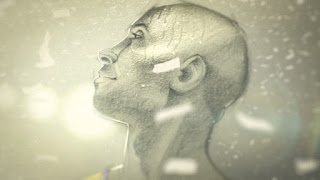 I know Bryant was a controversial figure in sports.  My brother personally didn't like him very much.  It might have been because he was on the opposing team.  It might have been the legal problems he got into.  It might have been Bryant's overall attitude.  As someone who does not particularly care about sports (and have not watched a full game of basketball in years), I can only judge the words and images as they appear on screen.  What little we have here is masterful stuff.  It perfectly visualizes the beauty of a sport I don't particularly care about, and Bryant's narration feels sincere.  Likewise, the short feels like a passion project from Keane, who animates the sport with great emotion, and Williams, who is certainly big enough to say no to a project like this.  "Dear Basketball" is six minutes of perfection.  One that I feel can unite people in how they view (and understand) how a sport can touch someone so deeply in their life.