When the economy tanked in 2007 pretty much everyone felt it. I had neighbors who had lived across the street from my family for my entire life. When the housing and credit bubbles burst, my neighbors lost their jobs, had to sell the house, and downsized their life greatly. This was just one example of how corporate America's greed affected people I loved. Many of you reading this likely have your own personal stories of how the market crash affected you. With almost ten years since the event (and with the market largely recovered) is the time right to look back at the whole situation and just laugh? To a certain extent that is what director Adam McKay is saying with “The Big Short,” an almost satirical look at a group of men who profited greatly from the housing market crash because they actually took the time to look at the market and figure out the world economy was going to go down the toilet. 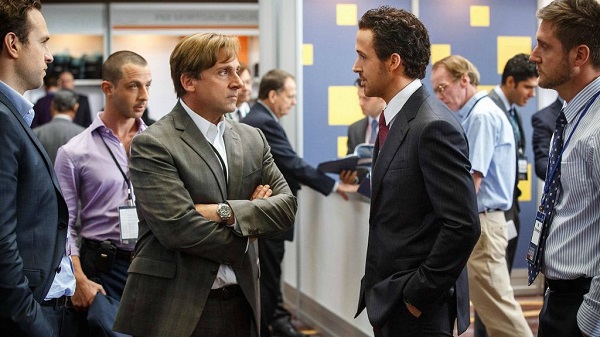 The men range from guys who know nothing in the world except numbers, upstart men who are looking to make a little extra cash, and at least one man who hates the banks and openly wants them to fail on a major level. For the most part none of these men would have anything to do with one another (in some cases they never even meet). What they aren't though is greedy. If they were greedy, they would be betting on the housing market to succeed, just as it had always done. Michael Burry (Christian Bale) is the only one who looks at the market and notices a problem. He sees the potential for trouble when he realizes mortgage rates will go up and average person won't be able to make those payments. The numbers aspect of all this gets tricky and boring, so the film cuts away to famous chefs, Ph.D.'s, and even a cameo by Selena Gomez to help explain the situation to those who aren't good with them.

Normally this would have been a big help to me, but I've seen many documentaries on this subject in the last several years, so I'm pretty well equipped to follow the convoluted process. “The Big Short” is sort of the mainstream telling of the story for audiences who don't like to watch documentaries. It's told with witty narration by Ryan Gosling, shots of strippers shaking their money makers, and heated debates that would borderline on satire if they weren't so common in the business world. Because this is a movie targeted towards people who are not really into the business aspect of things much, that may explain why we spend the most time with Mark Baum (Steve Carell), who takes a bit of joy in watching the big banks screw themselves over. He knows the situation is dire. He knows it is avoidable. He even acknowledges that profiting from such a disaster is hypocritical. But boy oh boy does he want this to happen. 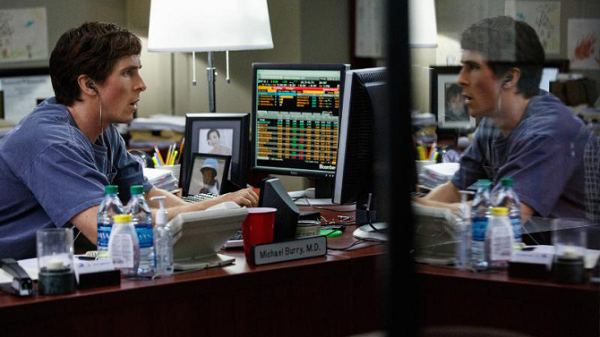 The rest of the characters aren't given nearly as much screen time nor are they as relatable. Brad Pitt plays a man who used to work on Wall Street before he became disgusted by the whole business and decided to dedicate his life to growing organic vegetables in his personal garden. Bale's character is eccentric to be sure, but in his own words “I am not good as being sociable, I am just good at seeing numbers,” and that rings so true that it's hard to get a good reading on him most of the time. There is also the elephant in the room that is only touched upon briefly: If everyone is going to be making money off the average person's failure, doesn't that make them just as bad as the evil bank CEO's they are pointing fingers at? It's a complicated question, one that this film is not much interested in exploring. Not that it really needs to. 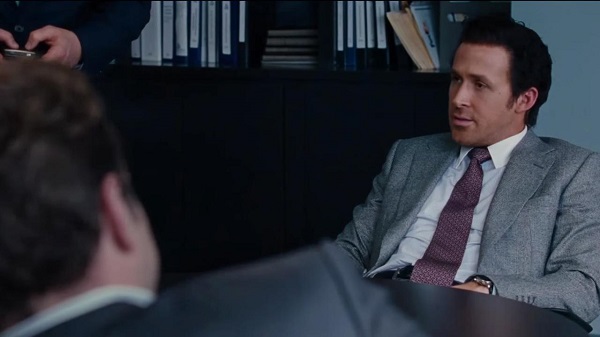 The point of “The Big Short” is not to provide scathing commentary (there are plenty of documentaries that provide that); the point is to make an entertaining film from one of American's biggest personal failures. That it is usually funny is because of the screenplay and the actors who were sought out to be in this. That it is scary is because the situation is all too real, was glossed over as frivolously here as it was in real life. What makes it concerning is that this isn't an isolated incident. Nothing serious was done to change the way business was done on Wall Street and we could be heading towards a repeat situation again if we aren't careful. That may be why the final five minutes left me laughing while I shook my head in frustration.