I hear the argument all the time that sometimes it’s better to fail being ambitious then it is to succeed modestly. In some ways I can see where people are coming, but I consider a success a success and a failure a failure. If it’s in between it most likely fails my measuring stick of “if a movie doesn’t inspire a conversation beyond the parking lot it’s a waste of time.” Back in 1985 Disney was ready to take the animation world by storm again. They had made a few average animated films and they were ready to make animated films big again. They wanted to create a Snow White for the new generation. They felt that movie would be “The Black Cauldron.” 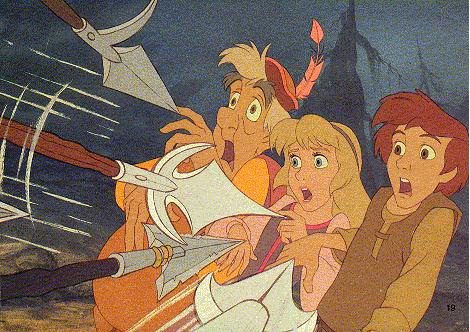 The story involves a young boy named Taran who wants to become a famous warrior. He’s nothing more than a pig boy, but he happens to take care of pig that can see the future with water. Of course this means that a powerful Disney villain will want the pig. In this case that villain is the Horned King, who is actually one of the creepiest villains ever produced by Disney. Other characters include Princess Eilonwy, Flewddur, the comic relief Gurgi, and the Creeper, who is the villains sidekick and far less annoying then you’d expect. For Disney “The Black Cauldron” was the first of many for them. It was their first animated film without songs of any kind.

It was their first Cinemascope film in years. It was their first PG-rated film. It was also the first film that lost enough money that it almost brought the studio down. But is the movie really that bad? No, it’s not. In fact, contrary to belief this is a pretty good film. The characters are all interesting to a certain degree. Comic relief is actually funny rather than annoying. I know the 80’s were considered a time when Disney animation was poor quality. I’ll admit that it was, but “The Black Cauldron.” is an extremely good looking film. If the movie were more successful I believe many of these characters would be classic Disney staples. 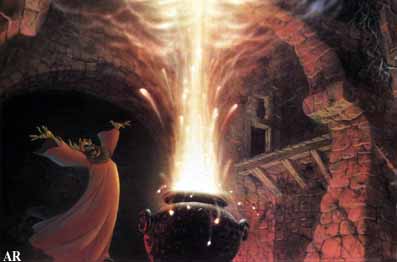 Yeah the story is rather thin for an epic fantasy. Yes some late editing in the film likely hurt the (still rather) violent climax of the film. I guess it’s also saying something that the Black Cauldron itself at times seems to be a McGuffen, existing for the sole purpose of giving the characters something to chase after (even though this one actually seems to do something if found). Yes, “The Black Cauldron” is not a great Disney film. However it is a very good Disney film. It’s ambitious and daring, and while it never quite reaches higher ground it’s commendable that Disney took such a bold risk in the first place. Now the movie is available on DVD and gaining more fans by the day. Sounds like a perfect ending for a film with the…let’s say, “checkered” history it has.