"The Blind Side" Review


I know that my opinion tends to differ slightly from my friends and family, but sometimes I just wonder how their love for certain films can be so misguided. Granted my family tends to never like too many movies that are outright lousy, but when a movie like “The Blind Side” comes along they all jump onboard the thing for all the wrong reasons. To hear them tell it this is a movie that connected with them because it was about a true life underdog who rose from the ashes of poverty and became a great football player. This person is Michael “Big Mike” Oher (Quinton Aaron), who is currently an offensive tackle for the Baltimore Ravens. 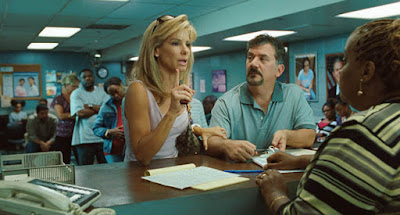 While that would be an interesting movie this is not what “The Blind Side” is about. The movie is actually about Leigh Ann Tuohy (Sandra Bullock in an Academy Award-winning role), a devout Republican Christian who spots Mike walking on the road one night after her daughters volleyball game. With the backing of her husband Sean (Tim McGraw), Leigh Ann gives Mike a bed, a room, and eventually the family adopts him. It’s a pleasant enough story and I understand why so many people got swept up in it. Really, I do. It’s white rich Christians doing what many Christians say they should do (but rarely ever do). Not only that, but this is an underdog movie. 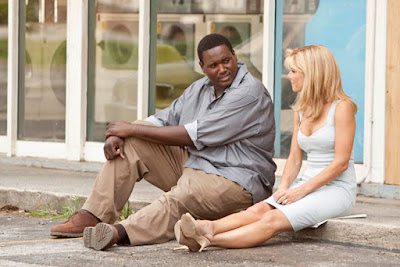 Historically people love underdog films. If I have any concerns about the movie is that it’s too sweet with little conflict or interest in where the heart of the story really is. I’m sure the real life Leigh Ann was a wonderful person, but she’s so good it’s almost painful sometimes. When one of her friends tells her that she’s changing Mike’s life she says “no...no, he’s changing mine.” Based on what? From what I can tell this woman is a saint from the get go, and outside of swallowing her pride and hiring a Democrat for Mike’s tutor there’s no room for her to be a better person. 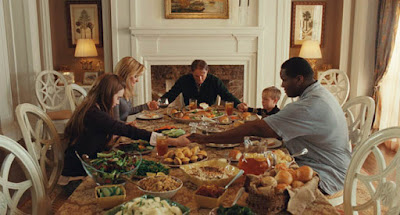 Mike himself doesn’t fare much better. With little to no personality and a murky back story, he strikes me as more of a pet for the family then an actual character. And yet...this is almost a good movie. Almost. In fact, it’s so close to being a good movie it’s almost painful. It’s got likable characters, an interesting premise, and great performances. What it lacks is conflict, the real story at heart, and a reason to get emotionally involved. Many people love this movie now and many more likely will in the future. It just doesn’t go the extra for me to recommend, though I’ll acknowledge up-front I’m likely in the minority there.