“Adrift” is a movie that for a good portion left me feeling cold and indifferent.  I don’t particularly like movies that start in the middle of the story (only to backtrack to the beginning) for the most part.  I usually consider it a sign that the film makers don’t trust the audience to stay engaged with the story until the gears get into motion.  I complained about this a couple of years ago when Clint Eastwood made the odd decision to start “Sully” near the end of the story with the trial, as if the plane crashing in the first ten minutes was too slow of a start to properly engage the audience.  This is not a fatal flaw though, as the title itself strongly hints at the events to come, and once I saw the full movie, the hacked-up screenplay made much more sense, and I was able to appreciate what the film makers were trying to accomplish.

Once I was able to see the whole picture, it was time to re-evaluate the film as a whole, as a journey and character drama where two traveling lovebirds find themselves shipwrecked in the middle of the ocean.  We’ve seen stories like this before, of course.  “Life of Pi” and “Cast Away” both stand out as exceptional films that dealt with sophisticated themes of survival and what inspires one to live in the face of all odds.  I doubt “Adrift” will join the ranks of those films (for reasons I am hesitant to revel), but it is based off the true story of Tammy Oldham (Shailene Woodley) and Richard Sharp (Sam Claflin), so this film should (at least in theory) be based more on the facts than any artistic speculation.  It is merely telling a true-life story of two free spirits who traveled the world on a boat, free from a mortgage and responsibilities, who get on the bad side of Mother Nature. 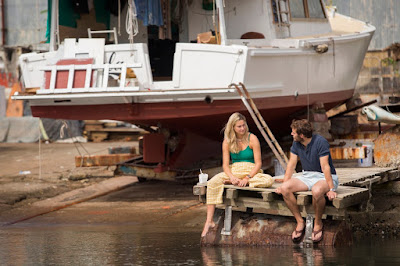 Before the accident Tammy is merely a young woman traveling the world.  Conversations later on clue us in that she might be running from life more so than she is sightseeing, but for now she’s young and unattached, thus she lives a life many of us look back on and wish we had done ourselves.  She meets Richard on these travels and is impressed with his custom-made boat and ability to properly gut a fish he caught by hand (despite herself being a vegetarian).  The two have dinner, share stories of parents that expected more from them, and decide to continue their individual journeys together.  I’m sorry to say I wish we got to know them better before the disaster occurs.  Again, having seen the whole movie, I understand this direction, but it is a hurdle for us to be too concerned for their survival (outside of basic human empathy that is) when we are getting to know them after the fact. 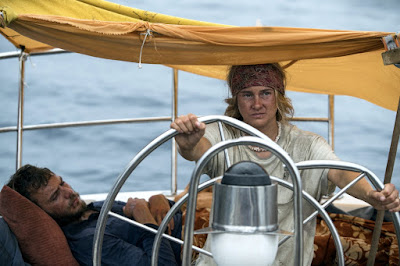 As the film goes on we do get to know them better and even grow to like them.  Even if this comes a little late in the game, I suppose it comes early enough for us to truly care, so I’ll chalk that up to a win in the movies favor.  Truthfully, the movie might best be remembered for the unconventional way it pulls itself out of under the weight it sets up for itself and manages to do something truly memorable.  I’m not sure if that memorable thing is enough to get me to watch it again, since I perfectly understood what it means and have no need to revisit it again.  But, yeah, I’ll admit…it left an impression on me.  I guess this makes “Adrift” one of the truest recent examples of a movie that probably didn’t normally do enough to get by, but managed to do that one thing incredibly well that to not recommend it would be akin to not giving a passing grade to that one kid who made a wise point in his book review that was otherwise all over the place.  Take that for what you will (I know I sure did).