“Book Club” is the kind of movie feminists hate because it makes it look like older women have nothing better to do than sit around, drink wine, and talk about how great their lives are because of the men in their lives (or how un-great it is for those who have none).  It is also the kind of movie that men hate because it is boring.  The failed result on both levels may have to do with the fact that the film is directed by Bill Holderman, who is making his feature film debut.  The fact that we have a movie about and starring women that is not, in fact, helmed by a woman may prove why the movie fails in my first complaint.  The fact that Holdernman is unexperienced may be why he is unable to direct a movie that rises to a quality level despite having many legendary (and, in some cases, Academy Award-winning) actors and actresses. 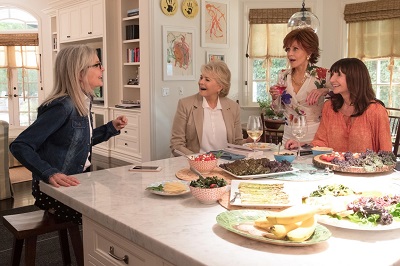 I admit it is nice to see Jane Fonda, Diane Keaton, Candice Bergen, and Mary Steenburgen all headlining a movie in a day and age where the difficulties of older women finding work in Hollywood is discussed more than it ever has been before.  It’s a shame to think that they once headlined movies like “Klute,” “Annie Hall,” “Gandhi,” and “Melvin and Howard” only to ultimately wind up in this, but everyone has to eat, and I suppose you could do far worse than a movie like this.  Yes, “Book Club” is bad.  But it’s one of those bad movies that exist on a level that is straight, non-intimidating, and exhibits just enough talent from the cast that you even find yourself laughing a bit here and there.  For some watching this will be serviceable enough to get by, and for those people I am glad they will enjoy themselves. 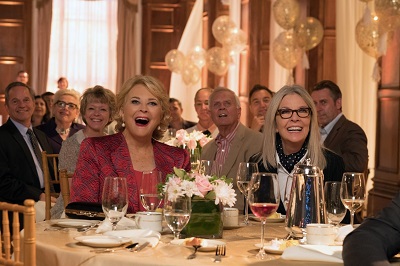 For me though, a movie that has this much talent, and revolves around said talent running a book club, it’s a shame that the discussion revolves around “Fifty Shades of Grey,” which managed to be one of the biggest embarrassments to both literature and cinema within the span of five years.  Even then the women don’t discuss the book much.  Every time it is mentioned it is brought up only so the ladies can compare the fictional sex lives of the characters with their own non-existent sex life.  Diane (Diane Keaton) has recently lost her husband and is fearful of getting into a relationship with a pilot, who is so rich and charming of course the problem has to be with her.  Vivian (Jane Fonda) is a bar-hopping hotel owner who runs into an old boyfriend who once tried to propose to her.  He may be interested in rekindling that relationship, but she is too busy having fun to settle down.  Sharon (Candice Bergen) is a district judge who has made it a source of pride that she hasn’t had sex in 18 years.  Finally, Carol (Mary Steenburgen) used to have daily romps with her husband Bruce (Craig T. Nelson), until he become more interested in his bike. 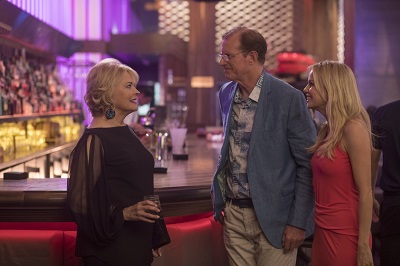 I don’t feel the need to spend any time discussing the arcs of these characters because we all know where they are heading.  This is a film that is playing to a very specific audience, and when you know who you’re playing to, sometimes surprises have to be left on the cutting room floor.  As a film historian, I am more fascinated as to how actresses of this caliber were convinced to make a movie that was likely less interesting to watch than it was to hear their agents try to pitch it to them.  Personally, I think these women are too smart and too successful to be comparing “Fifty Shades of Grey” to their persona lives.  They should be discussing Shakespeare, Jane Austin, and wondering if J.D. Salinger could have ever truly followed up “The Catcher in the Rye.”  I think it would have been far more fascinating for them to discuss how classic books influence their lives, not smutty trash.  “Book Club” is about smart, successful woman, so it’s a shame the movie doesn’t portray them as such.