The main problem I see with the filmography of Sony Pictures Animation – whether it be “Cloudy with a Chance of Meatballs,” “The Smurfs,” or “Open Season” – is that this is a studio that doesn’t seem to be taking their craft very seriously.  The movies they produce are constantly moving, always shouting, and never pause to take a breath.  In a world where kids have ADD more than ever, Sony’s animated films are expensive versions of waving keys in front of your face.  The first “Hotel Transylvania” moved like a mouse on Ritalin, and “Hotel Transylvania 2” is honestly not a whole better.  To be fair, it IS better, but just slightly.  You may remember in the first film Dracula (Adam Sandler) ran a hotel exclusively for monsters.  Humans were strictly prohibited, but a backpacking stoner named Johnathan (Andy Samberg) managed to sneak into hotel and fall in love with Dracula’s daughter, Mavis (Selena Gomez). 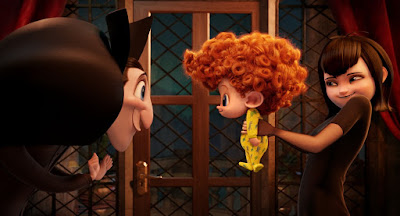 In this film the two have married and have produced a son named Dennis (Asher Blinkoff).  Dennis is a cute kid with the sort of stereotypical personalities five year olds have in movies, but he is causing a lot of problems in the family because he has yet to get his vampire teeth, and may, in fact, be completely human.  This is a problem for Dracula, who (as his daughter puts it) “has let humans into [his] hotel but not [his] heart.”  So, basically, the problem is that he is annoyed by the fact that humans no longer find monsters scary (as you can see, this screenplay is pure poetry).  Yeah, humans no longer fear monsters, but I don’t think that can be blamed solely on interspecies marriage.  After all, monsters no longer scare people.  They no longer prowl.  Heck, they don’t even hunt anymore.  They have no need to (as the Wolfman puts it, “we have Pop Tarts now”). 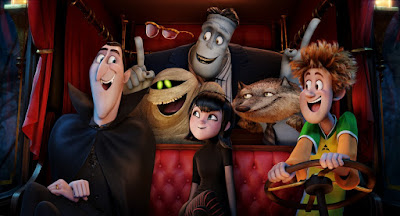 I find it interesting that this is the issue Dracula has, seeing that the other major concern in this movie is Mavis wanting to move her family to California because she isn’t certain Dennis growing up around monsters is a good idea.  The third dilemma involves Dracula not knowing how to use a smart phone…which, honestly, is such an outdated form of humor it’s barely worth discussing.  It’s the sort of lazy storytelling from a movie that is too dumb to realize that smartphones caught on precisely because people who weren’t tech-savy were able to figure out how to use them.  There are times when “Hotel Transylvania 2” seems like it has moments where it’s going to be cleverer than you think it will.  There are moments where it seems like there are genuine emotional moments to be had for these characters.  These never materialize though because the movie is not interested in aiming high so much as it is telling a cheap joke. 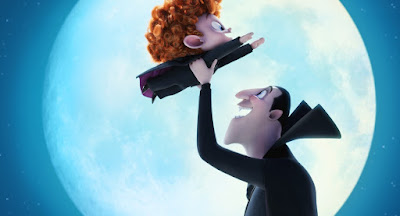 Like the first film, this movie was directed by Genndy Tartakovsky, who made his career directing TV shows for Cartoon Network.  While he may have been good at directing short entertainment, it clear that after two films the man has learned nothing about what makes for a good feature length script.  He doesn’t even realize that you can exhilarate lots of energy in short spurts, but when you stretch that energy out for an hour and a half it works to the opposite effect, and it just becomes exhausting to watch.  Likewise, in a day and age where 3D is struggling financially while it is also finding its artistic stride, “Hotel Transylvania 2” works against the format more so than any other movie I’ve seen this year.  Yes, the film is made with the 3D in mind, but all the characters do is throw things at the screen, rather than use the effect to immerse the audience. 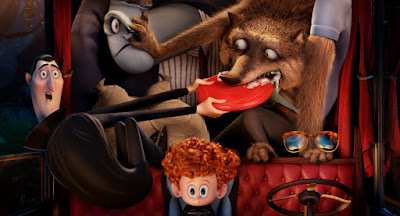 That means the shots look silly in 3D and weird in 2D (and it’s a major accomplishment when you get the look of your film wrong in two different formats).  All of this combined makes “Hotel Transylvania 2” easily the worst family film of the year.  I keep hoping Sony eventually figures out how to make great animated movies, but I sense they seem content to just keeping throwing things at the screen and hope something sticks.