How does a movie manage to move so far away from its original concept yet manage to be about the same thing every time?  This is a question I ultimately had to ask myself while I watched "Jurassic World: Fallen Kingdom," a movie that gave me what I was expecting, but doing so in a way that was much less interesting than it had been in the past.  I had to do some serious soul-searching after an initial review draft managed to convey perfectly why the movie failed despite delivering exactly what you most likely want from a film such as this.  So, hopefully (unlike this movie), my second attempt at this will provide fruit in my endeavour.  We can only hope.

I suppose to understand my frustration is to understand the themes of the 'Jurassic Park' series in general.  When the first movie came out, Steven Spielberg made it primarily because he wanted to bring dinosaurs to life and build a fun horror movie around that concept.  That it was successful should have probably come as no surprise, but the lasting impact it left of people's imaginations probably took the studios by surprise, and thus they decided to stand on the shoulders of geniuses to accomplish something as fast as they could.   Before they even knew what they had they patented it and packaged it and slapped it on a plastic lunchbox, and they've been selling it for the last two decades.  Since then we have gotten a variety of these movies.  Some have been good, while some have been bad.  Few have taken themselves too seriously and none have recaptured the magical experience of the first (though Spielberg himself tried). 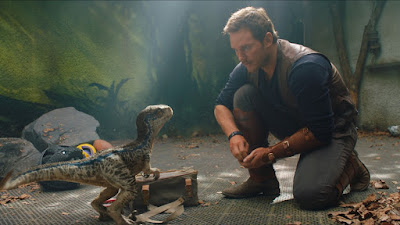 The newer movies, I find, are more about thrills and special effects than creating wonder.  It's more about who's going to be eaten rather than the excitement of seeing who survives.  With "Jurassic World: Fallen Kingdom" the series takes a new direction, in which humans wants to save the dinosaur's from dying on the abandoned Jurassic World island, so that they may be repurposed as military weapons.  Now, I will admit that there is a part of me that wonders why this hasn't been brought up sooner.  Everyone is these movies are so concerned about selling popcorn to bystanders who want to see a Tyrannosaurus rex, that we may have overlooked the fact that dropping one in North Korea could certainly do some VERY serious damage!

Some, in fact, are so in love with this idea, that they have discovered a way to create their own raptor that can be controlled with a sound gun.  It all makes for a good lead up to running and screaming when things inevitably go wrong...but, I have to admit that the movies recent habit of creating new dinosaurs seems to violate the spirit of the franchise, in which the wonder and excitement came from recreating dinosaurs in the first place.  The more the series goes down the path of creating new dinosaurs with skills that could almost be seen as superpowers, the more silly the whole concept becomes.  There may or may not even be hints that human cloning is coming into the picture, and boy, won't THAT be a weird concept to fully flesh out in the next film!

And the more I talk about the things that differentiate this movie from the previous ones, the more I realize that the concept probably was best used as a one shot.  We are now watching B-movies that manage to get major stars like Chris Platt and Bryce Dallas Howard, and somewhere north of $300 million dollars budgets.  Sure, there may be an audience for those movies, but that amounts to throwing money at a project that should probably cheaper and sillier if it wants to be more fun to watch.  "Jurassic World: Fallen Kingdom" is a step in a slightly new direction for the franchise.  New story elements and concepts are surprising me after each new installment.  My reaction has not been of wonder though, it's been of confusion, and while I don't like the new direction the series is taking, I am also at a loss for what I want from it anymore.