“Teen Titans Go! To the Movies” is the ultimate insult for a movie adaptation.  It does the worst possible thing a film adaptation can do: Make the source material look bad in comparison.  Granted, the “Teen Titans Go!” TV show was never good.  I know it has its defenders, but really, as a fan of good comedy, it was difficult to tune in to Cartoon Network at random times, with nothing but this show being on, making tired jokes about farting, shaking booty, and (I swear to God) a whole episode where the characters do nothing but say the word ‘waffles’ repeatedly.  When I watch the show, I get the sense that it must not be that difficult to get into show business, if this is what qualifies as the highest rated kids show on cable.  Still, it has its defenders.  Some say not to take it too seriously.  Some say it’s supposed to be bad.  Some say it’s made for kids, so adults shouldn’t expect to be entertained.  Needless to say, “Teen Titans Go! To the Movies” proves ALL these statements 100% wrong (and laughable, when you really get down to it)! 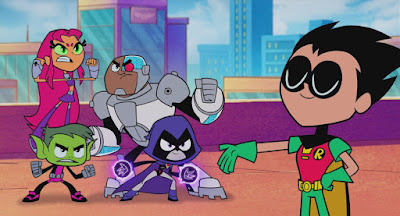 Compared to the show – where the superheroes are rarely fighting evil and usually just eating or beat boxing – are now forced out of their tower and into the streets to fight crime.  After all, if this is on TV for free, you must give audience members some reason to get off the couch and pay for it.  Thankfully, I am pleased to report that they have more than done that; “Teen Titans Go! To the Movies” features a mostly smart script, with good jokes, a few good musical numbers, and a scathing commentary on the world’s obsession with superhero movies (and maybe even on our use of mobile devices while they’re at it).  That means that Marvel does have some shade thrown at them.  It’s not long after that the Teen Titans turn the finger on themselves though, pointing out the glut of DC movies coming from Warner (and how few of them are actually good). 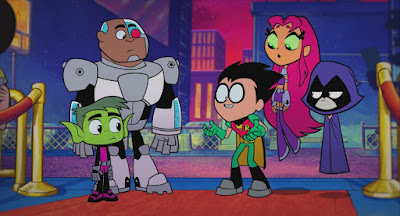 See, it turns out that having four or five seasons of a hit superhero show where the superheroes don’t fight villains makes it so that you aren’t taken seriously.  So, when Robin realizes that Aquaman is getting his own movie (as is Batman’s car), he immediately heads to Hollywood to see about what it will take to get a movie of his own.  The producers laugh him out of the room and tell him the hard truth: He does nothing but goof around, the Titans can’t get through a fight without farting, and they don’t have an arch nemesis with a cool name.  With this information the Titans decide that they can get a movie if they have a villain to square off against, and find one with Slade (Will Arnett), who LOOKS like Deadpool (but don’t worry parents; he has a PG-rated mouth)!  With this, the Titans have a nemesis, Robin has a chance to get a movie, and audiences get a Teen Titans story with a purpose (and even a couple cool action films).  It’s not a perfect film, mind you. 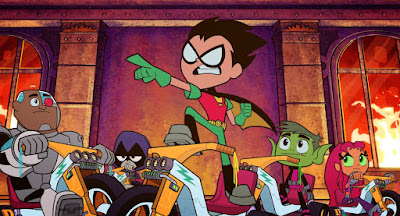 It is based on one of the laziest written shows on TV, and thus there are some repeated jokes.  It opens with a prolonged sequence involving a fart, and there is some general silliness that comes straight from Saturday morning cartoons.  This is by no means perfect.  It’s not even great.  However, considering the source material, it not only excels at what it sets out to do, but it is a lot of fun, and I suspect a lot of teens and adults are going to be very surprised at how clever the movie is at times.  If parents are on a budget, I think they could rent “The LEGO Batman Movie” and save some money, since that’s the movie that shares the most similarities to this one.  But there is an enjoyable time to be had, so it’s not the worst family outing your going to have all year.  Still, I must ask: Is there a particular reason all these animated superhero movies have beat boxing?  Has that officially become a trope?  Ah well, I suppose it’s not a painful joke…for “Teen Titans Go!”