It's scary to think how shallow the world has become in regards to material lifestyles and fame. We eat up gossip magazines about the lifestyles of shallow celebrities, their home life, and what they wear. Sophia Coppola's “The Bling Ring” is based on the true events of five teenagers who decide to rob celebrities' houses. I hesitate to call all the houses they steal from a real stars home though. They steal stuff worth millions of dollars from Lindsey Lohan, Orlando Bloom, and Paris Hilton (who even cameo's as herself in this movie just to show what a good sport she is). These weren't street smart teens by any means. On the contrary, they were just like any other high schooled you would likely meet. 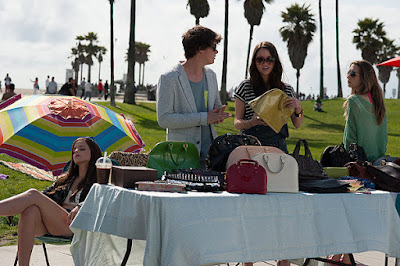 The group is unofficially led by Rebecca (Katie Chang), a girl who is envious of the lifestyles of the rich and famous she sees on TV. Her best friend is Marc (Israel Broussard) who isn't so much interested in living a materialistic life, but he is a lonely boy who craves real friendships. He helps Rebecca with her crimes because this is the closest person he has for a best friend. The crimes are not exactly sophisticated. All the teens have to do is Google the name for celebrities house address, read news about when they will be out of town, and then just walk in the door. Sometimes the keys are under the mats. Many of the houses they steal from the doors are just left unlocked. You'd think a rich person could afford basic security. Never mind. 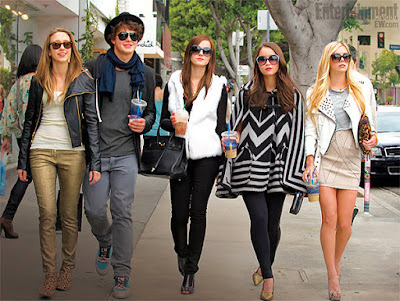 More people join the group with the most notable member being Nikki (Emma Watson), someone who considers herself worthy of the lifestyle they are stealing from and see's the whole thing as a game. It should be noted that none of these kids have bad lifestyles and most people would feel very fortunate to live in the homes they live in. These kids just want more out of life without working for it. Or maybe they just want the attention. If they were real criminals they wouldn't go to school bragging about all the people they've stolen from, wouldn't be taking pictures of them with the stolen goods, and they certainly wouldn't post all this information all over Facebook. 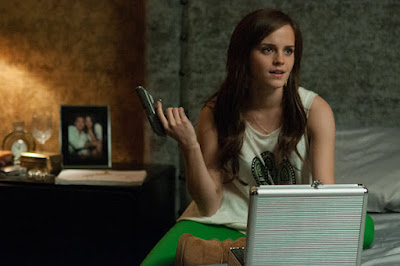 To watch these kids only form of entertainment is of them taking pictures of themselves wearing fancy jewelry is a very sad sight to see. We realize that this is all a game to these people. Why, one of the kids even finds a gun in Megan Fox's drawer and waves it around and pointing it to people as a toy. She doesn't seem to care when one of the kids asks her if the gun is loaded (her response it to point it at the person's face and ask “I don't know, are you chicken?”). When the girls do get caught they aren't really bothered by the fact that they are facing serious jail crime. All they see is camera's pointing at them like they are important. When being questioned one of the girl's biggest concerns is what Lindsey Lohan thinks of her. 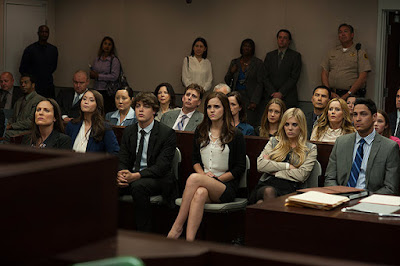 Sophia Coppola directs “The Bling Ring” with a firm grasp and purpose. She has directed a very poignant social commentary on where our priorities these days lie and how we've come to a point where we'll do anything for fame and attention. The fact that these robberies were committed for the sole purpose of putting on a show for friends is equally disheartening. Coppola films her characters in a way where she openly despises who these people are, but is wise enough to show that the social pressures of the world are just as much to blame as these kids are. They live in a world where status is judged by how impressive their Facebook pages are and whether or not they become famous. When heading to court the kids are treated like celebrities and important people. I guess nobody told the reporters that these were common criminals and that there were more important stories to cover that day.