During a Q&A Reddit session, MoviePass CEO Mitch Lowe was asked about his thoughts on "Gotti," one of the first films his new division MoviePass Ventures picked up to help distribute, which managed to get one of the rare 0% ratings on Rotten Tomatoes.  His response was one that a politician would be proud of: "I didn't look at my watch once."  A glowing review in comparison to others out there, to be sure, but the thing is I didn't look at my watch once during my viewing of the film, and it should be noted that not doing so isn't a sign of quality.  On the contrary, I didn't look at my watch because I was captivated by the awfulness that was unfolding before my eyes.  "Gotti" is the kind of movie that just manages to perplex a critic every step of the way. 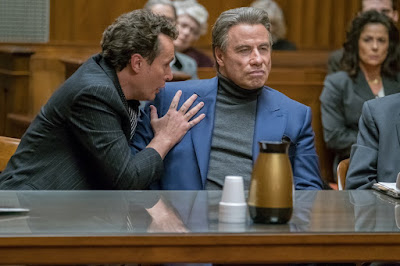 It is ambitious, to be sure (enough so that star John Travolta spent more than ten years trying to make it a reality), but it has no idea as to WHY it's ambitious!  It lacks focus or coherency, and is usually confusing.  I was rarely aware of what time period it was, who the characters were, or how they related to one another.  On the other hand, you have a lead character who commands the screen whenever he is on it, and Travolta looks like he is having the time of his life playing the part.  Yet when you really watch it, the performance is goofy in a way that makes it stand out, and not in a way that is enjoyable.  He out acts everyone in all his scenes, and yet I ended the film not really knowing any more about his character going in than I did going out (and his relationships with the people around him is even more murky). 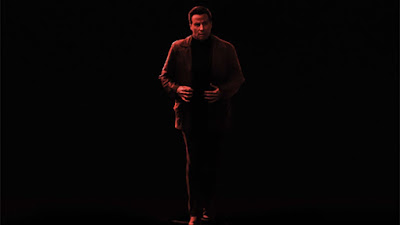 The action scenes - and I hesitate to use that term - show up in bursts of brief violence and non-suspenseful sequiturs.  How is it we have a mobster movie where not one gun shot or car explosion is the least bit surprising?  The movie is structured in such a way that it feels like suspense is a foreign concept in this world.  Truthfully, I'm not completely sure what this movie is even about.  Is it about the rise and fall of a mobster?  Is it about how pride comes before the fall?  Is it about a father and son relationship?  Since we're mentioning family, why is so much attention given to one kid and not the other four?  Is the fact that Gotti himself narrates the movie beyond death itself supposed to mean anything?  I don't know (and I suspect this film doesn't either). 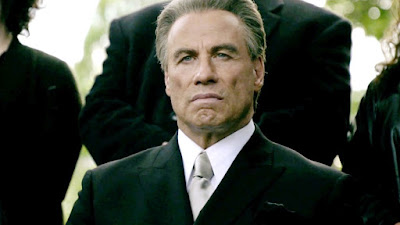 "Gotti" is ultimately the kind of once-in-a-lifetime train wreck that manages to be interesting enough to captivate you because of the failures, but not entertaining in the slightest to be enjoyable.  At most a movie of this incompetence could hope for a cult following who turns up for midnight screenings so that they may join their fellow movie goers in solidarity as they laugh, ridicule, and throw popcorn at the screen.  That will not happen; the film is too interesting.  Yet it doesn't work on any level that engages, and so the affair is quickly forgotten before it even finishes.  Mitch Lowe proved he understood this movie better than anyone when he commented that he never looked at his watch.  Many people won't look at their watch, but they won't hesitate to walk away and never give this a second viewing though.