The story for “BlacKkKlansman” sounds like it could be the setup for either a really racist joke or a bad skit on “Saturday Night Live”: A black man answers an ad in the paper and joins the Ku Klux Klan.  I’m certain there are a fair number of you who are wondering what such a sketch might actually look like, but the truth of the matter is this really happened.  A black cop by the name of Ron Stallworth actually managed to do this, and as a result he has one of the craziest stories to tell.  What’s more, it’s a story that almost didn’t happen.  Ron (John David Washington) signed up to be a cop in the Colorado Springs police department.  He was the first black cop the department has on the payroll (which would have made his story worth telling alone), and, as a result, is pretty much banished to the records room, where the department can claim they are taking steps towards progress without having him do anything.  He seems to have a knack for blending into large crowds of black people, which leads to assignments of him infiltrating Black Panther meetings. However, Ron has been so busy trying to assimilate into the world of white men, that he has a gift of sounding white over the phone.  Which, now that I think about it, makes this the SECOND movie this year to tackle this topic (the first being “Sorry to Bother You”)!  This leads him to discovering an ad for the Ku Klux Klan, making a call, and then being asked to join the nasty mob.  It was one of those situations where he was expecting nothing more than to get a pamphlet or two but was so convincing he had an ‘in’ to a group of people that police had been unable (or unwilling) to infiltrate for years.  Of course, we all know he can’t just walk up to these people and call it a day.  He needs a body double for the meetings themselves, while he plays the part over the phone to gather information.  He gets help from Detective Flip Zimmerman (Adam Driver), a Jewish born man who gladly takes on the assignment but is unprepared for the hate he must face in the form of men gleefully calling his family ‘kikes’ and ‘Jesus killers.’ 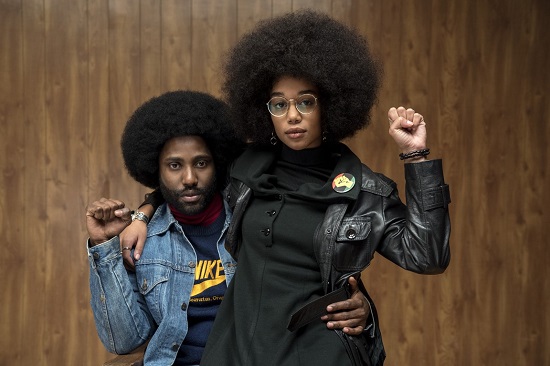 The scenes are funny because these men are stupid and shortsighted, unable to see how ridiculous they really are.  The scenes are also uncomfortable because they are convinced that their ideals are 100% true and pure, and you know that no amount of common sense or love will get them to change.  Take the phone conversations between Ron and the ‘Grand Wizard’ of the KKK, David Duke (Topher Grace).  They are fascinating to watch because when they aren’t talking race David seems like a nice guy.  When nationalism comes into the conversation the vile words of hate and racism flow out of him so easily – so casually even – that for him, he isn’t so much a hateful guy, it’s just that his way of looking at the world is a matter of fact.  He’s almost as bad as those people who tell me that the world is flat in such a casual tone that I know there is no potential to convince them of how wrong their thinking is.  It is amazing how funny and terribly painful it all is to watch. 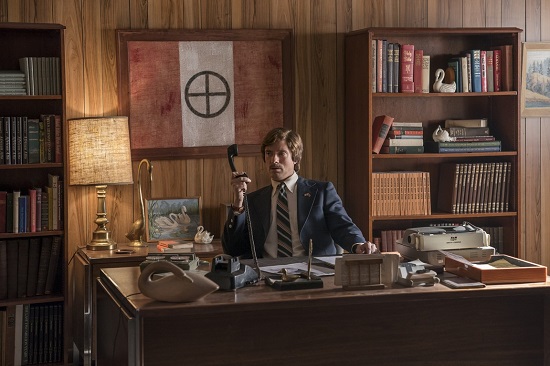 With that in mind, director Spike Lee is a smart man.  He is provocative with his films, yes, but he is not stupid.  He doesn’t rattle the cage just to rattle it.  He includes several scenes of black activists, tired of being mistreated by police, vowing to rise up and show how powerful they really are.  Scenes that cut back and forth between people shouting, “white power” and “black power” make the most powerful statement, because if we can’t learn to talk to one another, then racism will never truly go away.  It is a point that was very poignantly made years ago in “Do the Right Thing,” and it is just as important now.  Maybe even more so.  After all, we aren’t so far removed from the events of Charlottesville (an event powerfully woven into the final act), and the country is more racially divided than any other time I can think of.  Scenes of the KKK even rebranding themselves from a ‘cult’ to an ‘organization’ is another reminder of how far people will go to normalize hatred. 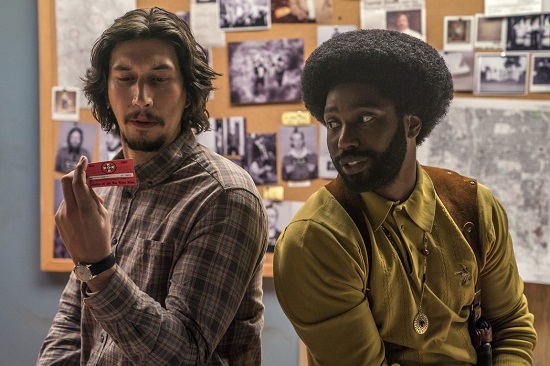 Frankly, we need a movie like “BlacKkKlansman” to not only highlight the stupidity of racism, but to highlight the danger of it continuing, and how much we have to lose because of it.  This is one of Lee’s absolute best films to date.  He is a much more confident director these days then he used to be, and the performances he gets out of his cast is nothing short of star making.  Particularly that of John David Washington (son of Denzel), who commands the screen whenever he is on it, and has the likability factor that is key to making even the detractors root for the guy.  At one point during the film a black man discusses what it was like living in America during the popularity of the classic film “The Birth of a Nation,” and how much hate it helped spread.  It was a film so fundamentally wrong in its case for evil, yet it was powerful enough that even the President of the United States said it was like ‘writing history with lightening.’  Another reminder, it seems, that film has just as much power to do harm as it does good.  Thankfully, “BlacKkKlansman” is one of the movies that will do much more good in this world and is a movie that truly is like ‘writing history with lightening.’