When the final pages of the last Winnie the Pooh book have been turned, kids all over the world listen with intensity as A.A. Milne revels a sad truth: Christopher Robin is growing up.  While 'doing nothing' was an especially important part of his life for many years, soon he will not be doing so much of it.  Children think about the implications of this situation, what it means for him, and what it may mean for all of us.  Adults read the passages with misty eyes, as they remember the day their toys were no longer the center of their lives, knowing that young Christopher will grow into an adult, have new responsibilities, and no longer be able to play with his toys the way he had been able to for so many years.  Some may even read these pages and think sorrowfully of the real Christopher Robin, who was emotionally scarred for the rest of his life over the popularity of the books. 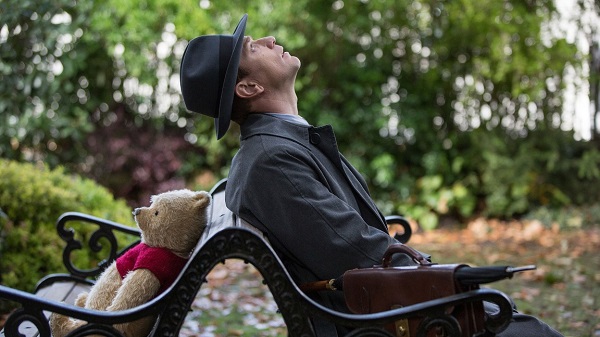 That story was told earlier this year in "Goodbye Christopher Robin."  Maybe in an attempt to sugar coat the reality of the successful characters doing real damage to a young boy, Disney has produced a fictionalized (and very imaginary) version of the story with "Christopher Robin," which shows the character of the books growing up himself.  Mind you, this is Christopher Robin from the books and NOT Christopher Robin the real person!  From the extensive reading I've done on the real life Christopher, his adult relationship with his old toys never recovered, and he went to his death bed loathing the very creation that made him a household name.  This Disney movie pictures the imaginary Christopher (Ewan McGregor) as a grown man who works too much, ignores his family, and has lost the ability to have fun and 'do nothing.'  It's one of those films where adult responsibilities do nothing but get in the way of fun, and only by Pooh and his friends coming back and reminding him of the joys of small things like balloons can Christopher find his way again.

It's a very offensive story on the surface, but I'll give credit to Disney for making it as heartwarming as they possibly could.  After all, "Christopher Robin" was made for families and not for cynical critics.  In fact, the movie itself seemed to be looking right at me, daring me to find a problem with the heartwarming concept of a man who is able to turn to his childhood toys once again and use his new found freedom to excel in life.  By not taking it too seriously I was able to get on board, though I suspect parents may have to talk to their kids about the harsh realities a man faces when he must come up with a budget for his company so that he may keep his job (which puts food on the table) and having to pass up on the weekend getaway with his family.  Or maybe such conversations will not be brought up because it's touching to see him blow off a days work to pretend to fight an imaginary heffalump. 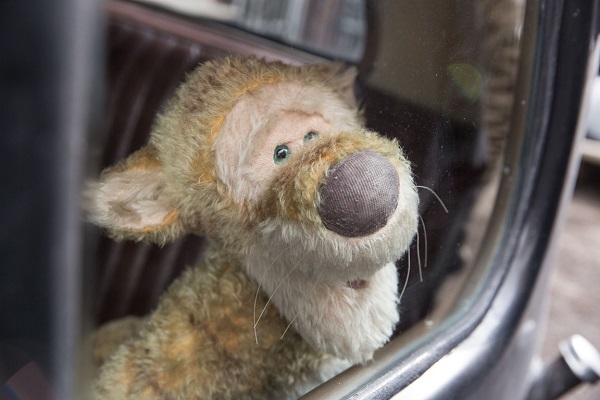 While watching the movie I was a bit torn on the inside. It's clear that this "Christopher Robin" is a fairy tale from Disney about the perils of growing up.  In their fantasy, work is bad, play is good, and your family would be better off if you blew off work to play with them.  The real world is not so kind though, and I suspect there will be people who are offended by Disney's oversimplification of the problem they themselves present.  I personally found the film to be a curious one that seemed to want to tackle a serious story of a man growing into a less than ideal adulthood, while being this funny cartoon with talking bears, pigs, and Tigger's reacting to 'foreign dangers' like mirrors.  I think the film makers were onto something by making a movie that toys with the idea of asking if an adult can go back to those simplistic, childhood days that are long gone, but isn't brave enough to take that extra step.

For this film, the joy of balloons, doing nothing, and bouncing are the remedies of life, while being gainfully employed is something that is nothing more than (as Pooh puts it) 'a big bother.'  I suppose I shouldn't be thinking that much about it since the movie clearly doesn't want me to, but if I wasn't supposed to worry about it, why does the film spend so much time emphasizing these problems?  I wonder if director Marc Forster (who is an excellent director in most cases) had a more nuanced and personal goal when he set out to make this film, and couldn't see it to its full realization on the basis that his employers simply don't want to make movies like that.  Does it matter ultimately?  Probably not.  It's a film with charm and some genuine nostalgia.  Realism isn't part of the bigger picture, so to think too much about it would make me a 'big bother,' so I might as well just go with the flow.