I don't know what issue to tackle first: The fact that Melissa McCarthy is potentially starring in two of the worst films of the year or the very misguided attempt to make an 'adult puppet' movie.  The origins of "The Happytime Murders" is not exactly a mystery to be solved, as film makers have been taking formats known primarily for children at one point (comic books, video games, animation) and trying to expand them into more 'mature' territory, so it was only natural that puppets would eventually have an adults only film.  What surprises me is that the director of the film is Brian Henson, son of Muppets creator Jim Henson.  He has worked with puppets his entire life and lived through his father's philosophy of being 'subtly adult' with the Muppets themselves. 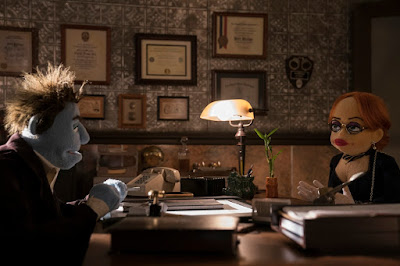 He probably decided that to make an adult puppet movie you had to (sadly) highlight some crude jokes and sexual innuendos.  What he failed to understand is that the Muppets were adult because they were mature in wit and timing.  "The Happytime Murders" is crude, vulgar, and offensive, sure, but it is also extremely childish and just a little embarrassing to watch for everyone involved in making it (an embarrassment we get to share in with a post-credits scene showing the puppeteers having to act out all the gross things we see play out on screen).  On one hand, I am impressed with how far puppetry has truly come.  Way back in the seventies it was a big deal when Jim Henson announced that Kermit would be seen riding a bicycle for the first time.  Now we have puppets that walk with humans, lift weights, and appear to have no limitations in the real world.  The fact that they are still doing this with practical effects (minus some digital cover up) makes the movie a joy to examine. 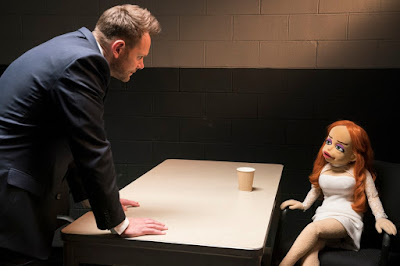 What is missing here is some real heart.  The story of Phil Phillips - a puppet who used to be a cop but is now a private investigator - is not one that lead to too much emotional reactions from me.  He is a cynic in a world of cynicism, and his primary function seems to be that of a disgraced cop from an eighties movie.  In all fairness, the movie itself seems like it was trying to mimic the eighties buddy cop genre, with McCarthy being the Danny Glover to Phil's Mel Gibson.  What is frustrating is that the two don't really have any chemistry together.  When the story sets into motion the two have had an obvious falling out, there should be a sense that there is still a friendship buried somewhere deep down inside.  When the two start to work together to solve a series of murders revolving around the cast of characters from an old show called "The Happytime Gang," there is no sense that they were once partners or even just friends. 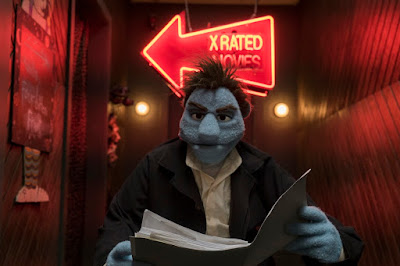 It's just one "edgy" joke after another, all while managing to be so childish that only the young (or young at heart) would find them funny.  While I watched the film and pondered how someone who had made one of the best Muppet movies ever ("The Muppet Christmas Carol") could completely not understand why people wanted a mature puppets movie, I thought of "Avenue Q," a Broadway production I saw in New York which managed to win the Tony Award for Best Musical.  Like "The Happytime Murders," "Avenue Q" was advertised as an "oh my God you'll NEVER believe what these puppets are saying" event.  Yes, it was sold as something edgy (and it did contain many NSFW moments), but the show had good music, likable characters, and a lot of heart as the main characters tried to find purpose in a (hilariously) mediocre lifestyle they had found themselves in. 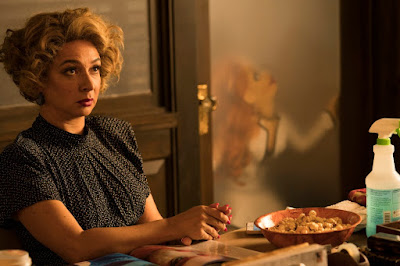 The creators of that show understood that you could make it with edgy humor, but without the adult maturity it would be disposable.  I think that's a lesson the makers behind "The Happytime Murders" have overlooked.  I'm not going to get into this preachy mode that Jim Henson would have never approved of this, because I have no idea what he would think.  I am of the personal belief that he would have been fine with making mature puppet productions, but if he saw the two side-by-side, he'd be way more impressed with the results of "Avenue Q" than almost anything found in his own sons production.  The fact that McCarthy's great comedic timing is not being used with characters that should allow her to be as flamboyant as possible is another missed opportunity. 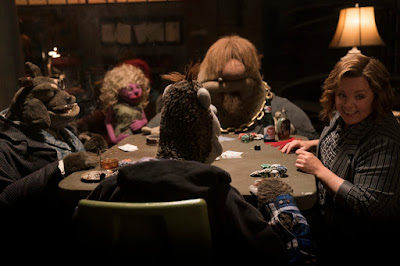 I don't want to act like this is the worst thing you'll ever see.  There are some funny jokes to be had and it is an impressive film on a technical scale.  The reason the movie offended me so much was just how lazy and routine the whole experience was.  It upset me that Brian Henson seemed to have forgotten the core principles of his fathers legacy, and it makes me scared because I think productions like "Avenue Q" would make for great movies, but you only get one chance to make a good first impression with specialty films like these.  I feel like by blowing it on something like "The Happytime Murders" we may have just killed any potentially rosy future a movie like this might have had, which makes the end result all the more disappointing.