By now most people have been reading differing articles and commentary pieces on Damien Chazelle's new film "First Man," a movie about Neil Armstrong, the first man to step on the moon.  The controversy that has sparked the various aforementioned pieces is whether a decision to not show Armstrong planting the American flag on the moon makes this movie "anti-American," and whether or not we are growing more and more politically correct when we want to focus on the "human achievement" during a situation that is widely accepted as that of "America vs the Soviet Union."  After all, the Space Race really was one where two countries were in a very public pissing contest; trying to prove which government was the most effective for the world to follow, and tried to make those points by shooting shiny objects into space.  A landing on the moon was considered the ultimate prize, and like any sport, you want the gold when you compete (not the silver). 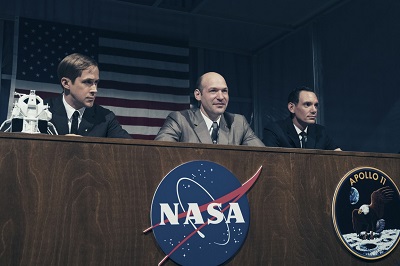 It should be noted, then, that "First Man" is not a movie about the space race.  While there is dialog in the movie commenting on what was surely occupying the thoughts of many Americans at the time, this is a movie about a man.  Neil Armstrong (Ryan Gosling), to be precise.  And while he is the man who would plant the flag on the moon and make the very famous statement that it was "one giant leap for mankind," he was first and foremost a person.  He was a husband, father, and friend to many people in his neighborhood. He was, however, a (mostly) quiet, reserved person.  He joins the space program at NASA shortly after the death of his daughter, who despite having a brain tumor was always looking towards the sky, wondering what it was going to be like up there.  It is a small but important moment in Neil's life, one that doesn't become obvious to the audience until much later in the film.

In fact, what surprised me most about "First Man" was how little the race to get to the moon seemed to matter to him.  For Neil, going to the moon was a very personal choice.  It was a chance for a fresh start.  It was a chance to explore the universe for his daughter.  In some ways, it may have been a chance to become whole on the inside once more.  He rarely discusses his feelings.  It is something his wife Janet (Claire Foy) is completely frustrated about.  He is so incapable of expressing them, that he abruptly leaves a funeral reception of a good friend of his, forcing his wife to get a ride home from someone else.  Later, on the night before Neil is to leave to embark on the Apollo 11 mission, his wife is frustrated that he won't stop packing.  In one of the movies most powerful scenes, she stresses the importance of him sitting down with his sons to tell them that their dad might not come home from this mission. Moments like these show how strange their relationship was.  She obviously cared for him and worried to death about whether or not he would come home, yet the frustrations on his inability to ever really open up becomes a sticking point.  For that matter, it is this reserved nature that likely leads to Chazelle having to visualize Neil's feelings and thoughts through images.  While I would argue that the powerhouse acting comes from Foy, Gosling manages to subtly express the inner feelings of our chief protagonist in a way that would be difficult for a less experienced actor, and it was exciting as a film fan to watch two actors engaging in two completely different styles of acting that none-the-less created a perfect marriage of chemistry.  The kind that is dynamic and tense, but believable in ways that few marriages are.

Now, with all that I have spent discussing the family aspect, it should be noted that there are many scenes of attempted space travel that is also breathtaking to witness.  Chazelle may be making a more personal film than most are expecting, but his attention to detail in all other aspects of what made the space mission feel so important in the first place is all here.  Again, some are clearly disappointed by the fact that we don't see the American flag planted on the moon, and many have taken Chazelle's comments about this being "a mankind achievement" a little out of context.  For this is not a movie about the moon landing but on Neil Armstrong.  While he did plant the flag, he also puts something else on the moon that got little to no attention from people, and it is more important for the audience this time around to see what was important to him personally when he landed on the moon.

What is important to him is something I will not spoil here, but let's just say it blind sided me and was easily much more emotional than seeing the flag being planted.  Plus, for what it's worth, the flag IS shown on the moon (as it is in various other shots in the film), so I doubt anyone can accuse this movie of not being patriotic.  Still, I've seen many movies about going to space.  Some are about the details of the mission ("The Right Stuff") and some are about politics we may not have been thinking about at the time ("Hidden Figure").  It's rare to see a movie that is so intimately about one man, while the looming presence of history in the making towers over everything, just barely out of reach, yet somehow possible.  It was an event bigger than a race, more personal than a flag, and in "First Man" we a have a movie more ambitious than even the subject matter could have provided.