You would think that when adapting a popular show for the big screen, the creators would make the first film as accessible to newcomers as possible while making the follow-up more in line with what fans are familiar with (seeing that now you would HAVE a previous film to build upon).  That isn't the case with "Sailor Moon S: The Movie," which is actually more fit for a general audience than the first film was.  Strangely enough, this is accomplished because the title character herself is largely sidelined in an odd (but sweet) story of a cat falling in love with her human rescuer.  Fans of the show will know the feline as Luna, the strong leader of the Sailor Solders, but even leaders have their sick days, and on the way home with a raging fever, Luna is almost run over by a bus (which would certainly change a lot in an upcoming season of a popular TV series). 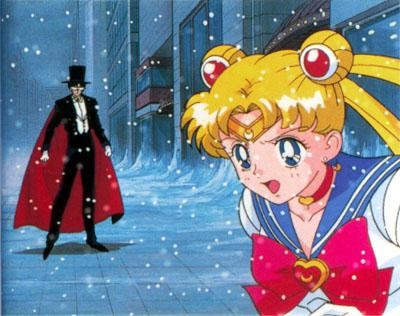 She is saved by a scientist who pulls her off the road in the nick of time, and then takes her home and nurses her back to health.  From that moment on Luna is in love.  Challenges arise due to several factors.  The most obvious is that there is a species difference between the two, but there is also the fact that Kakeru has a childhood friend named Himeko, whose feelings towards him seem to be more than platonic.  Their relationship is strained though because Kakeru is a man who has always believed in a princess that lives on the moon, and has stuck by this belief so much that he has thrown away a pretty promising career as an astronaut.  Himeko HAS accomplished this goal though and will be flying to the moon, but this fact alone creates tension between the two, and I am reminded of how effective this series is at conveying a lot of emotion without saying much. 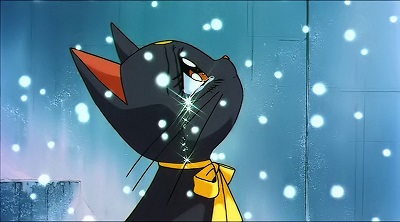 Don't worry kids: "Sailor Moon S: The Movie" doesn't completely revolve around this love story.  It does have a villain in the form of a Snow Queen, which exists to give us some decent action sequences (as well as being a round about way of justifying Kakeru's delusions).  How the two stories ultimately connect might be a little convenient for some audience members, but I admit to finding it clever enough for a kids film, and the whole experience was much more touching than I thought it was going to be.  Of course, this isn't as good as "Sailor Moon R; The Movie."  While that film was a little more antagonistic to newcomers, it did offer a lot more depth and emotion.  "Sailor Moon S: The Movie," in contrast, feels like the beginners film we were expecting to get the first time around. 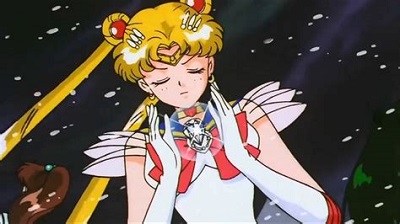 It's an experience that I don't find to be exceptionally great (especially when a contrived prophecy brings about the fall of the villain), but there are many sweet moments and it is, overall, harmless entertainment.  It is strange that Sailor Moon is almost regulated as useless in the grand scheme of things and the snow prevents the movie from being as colorful as the other films are, but there's a lot that works.  From an adult mind I also wonder what would have happened if the story with the Snow Queen had been scrapped altogether in favor of a straight out love story, but it is true that franchises are not known for taking too many chances in movies that are essentially placeholders for the next season of the show, and in that regard "Sailor Moon S: The Movie" doesn't take any itself.  It provides just enough of what fans want to hold them over until whatever comes next.