I don't know what has prompted me to review "George Balanchine's The Nutcracker," an odd 1993 movie adaptation of the popular Tchaikovsky ballet that I only saw once as a child in theaters way, WAY back in 1993!  It was the only adaptation of the play I had seen in theaters (the other one I saw - "Nutcracker: The Motion Picture - was viewed on a well-worn tape I rented from Blockbuster).  I remember enjoying the music and noticing "Home Alone" star Macaulay Culkin was the title character, but not much else.  I did seem to recall that there were women dressed in white dancing in snow as well, but that could have just as easily been some other random Christmas movie.  Still, the poster was always iconic in my head, and when I saw it on DVD for a measly $5, I figured it couldn't hurt to revisit the film, which I hadn't seen in some twenty six years. 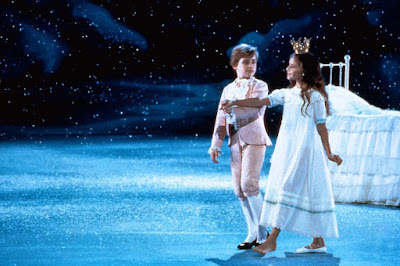 My reaction was...interesting, to say the least.  "George Balanchine's The Nutcracker" is named after the famed choreographer who directed the famous New York version of the show that was one of few versions to feature children.  As such, the show is designed to have dancing that is not as complex as the shows that would predominantly feature adults.  While most will agree this version is technically inferior to most, the sight of seeing actual children in the show adds a charm that the technically superior versions can not offer.  That said, this production is also on stage, where live performances can be challenging to ones with short legs.  This is a movie, which means there can be cuts, breaks, and even special effects to help aid the young dancers.  Oddly enough, though it is a film, the movie doesn't seem at all interested in using any of the advantages a film would have over a live production. 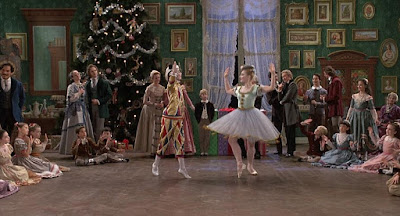 The sets are as noticeable here as they are on the stage.  The famous Rat King may be fine performed by an adult in a costume stage, but blown up on a big screen he looks more hokey than something you'd see on Sesame Street.  Then you have the fact that the movie makes some off choices in presentation, as if it didn't really know what it wanted to be.  It seems to want to be a faithful stage adaptation, but then hires the aforementioned Macaulay Culkin - who almost certainly had no professional dancing experience - in the lead role.  Culkin doesn't dance so much as he swings here and there, and sometimes does a small kick in his step.  He seems confused and lost half of the time, and bored and uninterested to be there the other half.  While his casting has likely kept the film in the public eye for kids who will always be interested in his filmography, it is overall a complete miscast as far as I'm concerned. 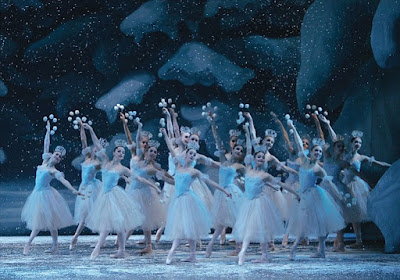 His co-star Jessica Lynn Cohen fares much better, seeing that she was likely a real dancer, and thankfully has much more to do here.  Also jarring is some narration from Kevin Kline, who I assume was added to explain to kids what was going on in the story.  Odd, seeing that the movie seemed to go out of its way to be a reproduction of the stage play, whose images are so well choreographed that words are usually not needed to figure out the plot.  Taking all this into account, I credit the film with trying to do something with 'The Nutcracker' ballet.  What they were trying to do, I have no idea, but they were trying to do something.  I suppose since it's being sold for $5 it might make a great stocking stuffer for kids.  However, there are at least a dozen adaptations of this source material, and I think "George Balanchine's The Nutcracker" may be one of the weaker ones I've seen, so diligent parents may want to seek out those better options.