It's hard to think that a movie about a blue hedgehog that runs really fast would be viewed upon as one of the most significant releases of the year.  Mainly because "Sonic the Hedgehog" isn't much different from other family films it shares a lot in common with.  Like "The Smurfs" and "Alive & the Chipmunks," the movie features a CGI character ripped from his appropriately animated (and colorful) world landing in the much more mundane 'real world' and interacting with human actors who (for the most part) act as if they are talking to thin air.  We've seen it before, we'll see it again, and this review would normally write itself because of how painfully redundant this tends to be.  Yet the movie is saved by two things: A brilliant casting decision that was made during the filming process, and a corporate decision that was made after the film was almost complete due to fan outrage.

It's the latter decision that would make this film more noteworthy than it otherwise would have been, but we'll get to that in a Super Sonic second (no need to 'rush' things, after all [ho ho]).  On that first note, however, it seems the film makers were certainly doing their homework when they decided it would be a great idea to cast Jim Carrey as the villainous Dr. Robotnik.  I'm not sure how that decision was made or why Carrey decided to accept, but it brings new meaning to the term "the villain is usually the most interesting character in the movie."  Well, alright, 'interesting' might be a stretch, but he's certainly the most entertaining one here.  Rather than the somber and serious Jim Carrey we've come to know the past decade, we get the lovable nineties Jim Carrey who talks fast, is flamboyantly manic, and does random dances that I can't for the life of me explain why they are important to the story itself...but dang, they sure are fun!

His take on Robotnik reminded me a lot of his performance as The Riddler in "Batman Forever" (just a little more kid friendly this time).  It's appropriately cartoony and would easily be a perfect fit should this series ever decide to move back to the animated CGI world at the beginning of the film.  The other aspect of the film that works is Sonic himself, who ends up having a great screen presence after a last-minute redesign took the world by storm.  By now you've heard the story, but for the few who are unfamiliar, a brief recap: "Sonic the Hedgehog" was almost complete and ready to be released to the public when the original trailer dropped to a huge outcry.  The world HATED what Sonic looked like!  From his humanoid legs, full set of teeth, and uncanny eyes, the outcry was so bad director Jeff Fowler announced they were going back to the drawing board to redesign the character and delay the film by a few months.  There is some concern to be had about letting the Twitter mob have a say in how a film is made (how many of us truly know what we want from a movie after all), however, from a personal perspective, the original design was so bad this was probably the wise thing to do.

Instead of having a somewhat realistic character who blends with the real world but is unappealing to the eyes, we now have a literal cartoon character that doesn't fit with his surroundings at all, but is much more pleasing to gaze upon.  If I'm being honest I'm not sure if that's an entirely great trade off (and I would certainly like to see what was finished of the original footage to see how some of this would have come off), however it seems like the right decision was made.  Not because it placated a bunch of angry Sonic fans, but because the movie plays so much like a cartoon, it seems silly the project at one point considered not embracing this aspect to the fullest.  Considering Sonic was at one point more recognizable than Mickey Mouse, the old design should have never gotten to the point it did, and while I've got mixed reactions as to how to got changed, I don't think Paramount could have sustained another infamous design choice like the ones in "Teenage Mutant Ninja Turtles," so I'm cutting them some slack.  As for the rest of the movie...eh, it's a kids movie.  What do you want me to say? 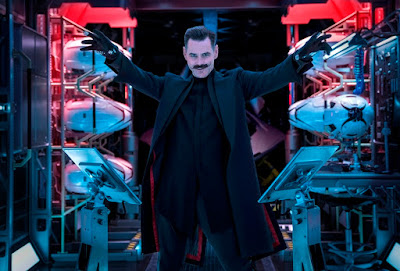 The action scenes are appropriately focused on a lot of speed and robots, the screenplay has the usual fart jokes one would expect, and Jason Marsden is a pro at acting alongside cartoon characters after having starred in "Hop" and "Enchanted" (and having pointed that out, it sort of feels like a promotion to be in "Sonic the Hedgehog").  The fact that the movie is better than, say, "Yogi Bear" comes down to having a good actor elevating the material and a late-to-the-game redesign that everybody happened to love.  Otherwise "Sonic the Hedgehog" likely wouldn't have crossed the recommendation line.  That it does comes off as a bit of a happy accident, and I can certainly say with confidence that parents are unlikely to be too bored.  I mean, sure, it's not "Detective Pikachu," but it's also not "Marmaduke," so I'll take my wins where I can and safely recommend it for parents who have young kids and limited movie options in theaters at the moment.  Should a sequel come along hopefully the film makers will lean more into the animated aspects, but we'll cross that crumbling bridge when we get there.