I've been sitting at my computer for a good awhile afraid to write this review.  I sort of feel like the critic from Brad Bird's "Ratatouille," who contemplates the purpose of his life work and admits there are risks when stepping out on a limb.  I feel that I will be stepping out on a limb with my review for "Onward" - the latest Pixar film - because it does pretty much everything I've wanted from a Pixar film in years...and yet I'm still not happy.  Some of you may scoff at why such a thing would bother me, but it really can hurt your ego a bit.  Here I've been, writing positive (but lukewarm) reviews for the last several Pixar films.  I bemoaned the fact that "Toy Story 4" felt pointless (as well as complained when it won the Oscar over the far better "Klaus").  I shrugged off "Incredibles II" as a fun but meaningless affair.  I'm still not sure why "Finding Dory" was made other than to give Andrew Stanton a hit movie after "John Carter" bombed.

Throughout all those reviews I hoped, pleaded, and practically begged for Pixar to give me another original film like the good old days.  Now they have given me "Onward," an original movie that has a unique concept.  And as I sat in the theater watching it I found myself bored and perplexed by what I was watching.  On one hand, you had a unique setup where wizards, elves, and griffins no longer used magic because heating up food was dangerous and the microwave could do it so much better.  I liked that idea.  On other hand, once I realized I would mostly be watching a movie with fantasical creatures doing very suburban things I felt short changed by the very same concept that was initially cool.  I really liked the idea that two boys cast a spell to bring their dead father back from the grave for one day.  I was more than frustrated when the spell got botched which forced the two leads to interact with a pair of legs (seriously, it's just one step above the idiocy of "Weekend at Bernie's").

The animation...alright, I have no problems with the animation.  It's beautiful to behold and I maintain that whatever the animators are getting paid to create these worlds it just simply isn't enough.  Though, again, as I sat watching the movie, I was confused as to why the animators weren't making use of the fantastic creatures they designed.  By the end everything ended up feeling very by-the-numbers despite how creative everything was, and thus I felt robbed of what was promising to be an emotional journey.  The movie is directed by Dan Scanlon, whose previous directorial job was "Monster's University."  That movie made far more use out of the unique monsters that were created, however I must note that it was a prequel to "Monster's Inc," and thus got a lot of use out of the memorable cast that director/writer Pete Doctor brought to that project.  Taking both films into account, I'm going to lean that Scanlon does well when he's playing with someone else's toys, but has yet to master the art of creating compelling toys of his own.

In this case the toys are the characters, and in "Onward" the main characters are two elves named Ian (Tom Holland) and Barley (Chris Pratt), both of whom grew up in a fantasy world where no one uses magic anymore because technology is easier and safer.  It's where a centaur will drive a car over galloping, the unicorns act more like stray cats than majestical beings, and a tavern once owned by the fiercest adventurer in all the land has been converted to a family restaurant that reminds us more of Chuck E. Cheese than what you would find in the taverns on "Game of Thrones."  As you look objectively at these situations you can appreciate the idea behind them, yet you are frustrated that you are essentially watching a fantasy world that (by design) is lazy and milquetoast.  The world is so milquetoast, in fact, that the boys are then surprised to find a staff left behind by their father, with a spell that would bring in back to life for one day. 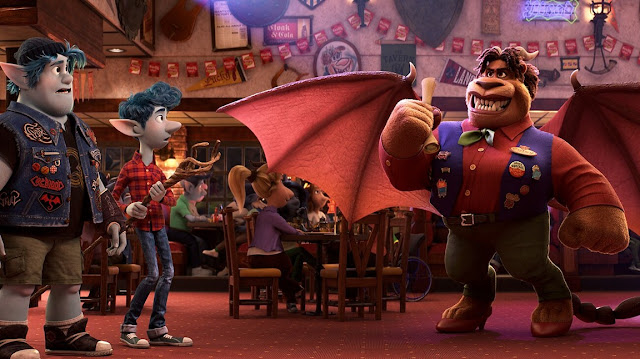 Ian never even met his father, so this was a strong setup.  Sadly, the spell is botched and the only part of him they manage to bring back is his two legs, and need to go on a quest to find a crystal to bring the rest of him back for the remainder of the day.  This is where I started to lose it.  I know this is a movie made for families, but Pixar has never been one to shy away from bleak realities and heart crushing moments.  I feel that a movie where the two boys actually get to spend a real day with their deceased dad would have opened the door to many possibilities.  How would he react to them?  Would Ian like his dad?  Would their dad react poorly at what has become of the world?  So many wasted possibilities.  And for what?  Another buddy road comedy that Pixar built their studio upon (and has made better in the past)? 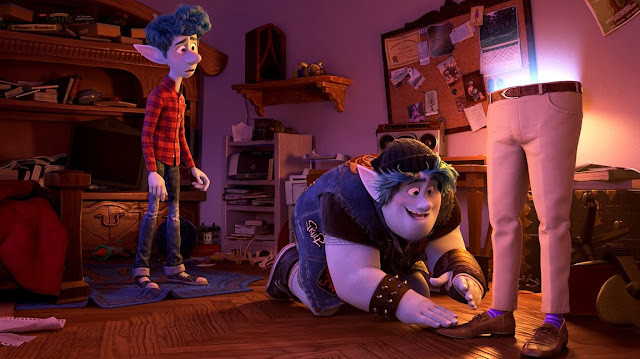 I mean...to the films credit, this isn't a BAD film by any stretch!  I just find it terribly uninteresting and enjoying what my imagination came up with better.  That's not what Pixar films do.  Pixar worlds literally pull you into the world they created.  They take you to places you've never been and make you feel emotions you don't expect to.  The ending has a little of that, but is that enough when the movie opens by promising you Disneyland and ends up giving you Knott's Berry Farm?  I don't know, maybe on another day I would have been more sucked in by this.  I will certainly give it credit for not being a sequel.  However, "Onward" gives us all the predicable story troops they mastered in the past all while holding back a magical experience right before our eye's.  Call me difficult to please, but if their heart isn't in it I'd rather they work on a soulless cash grab.