"Over the Moon" Review

Its crazy to think that in his thirty plus years of experience as an animator at Disney, Glen Keane had never directed a feature film before.  Sure, he directed the Osar-winning short “Dear Basketball” and was once slated to direct “Tangled” (before he stepped down from the project due to a health scare), but the man who animated Ariel, Tarzan, the Beast, and many of our childhood heroes has never once been behind the directors chair.  What’s more amazing is the fact that he had to leave Disney before he was given his big chance, and that chance comes courtesy of Netflix (who thankfully has a habit of throwing money at talent major studios don’t want anymore).  The animation was provided by Pearl, a Chinese company that used to be owned by DreamWorks Animation, but has since gained independence.  There is probably a good joke in there somewhere, but I’m having a hard time reaching for it. 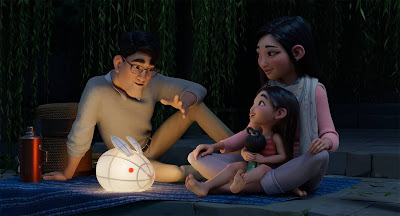 None of this will matter to the primary audience who will be watching this though (AKA: Kids).  For them, they will have scant interest in the fact that it was animated in China, funded by an internet company who used to be known for mailing DVD’s, nor will the name Glen Keane mean anything to them.  They will be focused on the bright colors (of which there are plenty), the serviceable songs, and the fact that it’s the newest thing on the Netflix Kids main page until something else comes along.  Netflix has promised that they will be releasing up to six animated films a year.  If they are all like “Over the Moon” then we will be getting plenty of movies that are really…okay.  Unlike most people who will discover this movie, my wife and I got to see “Over the Moon” in an actual movie theater, where the visuals could be appreciated much more. 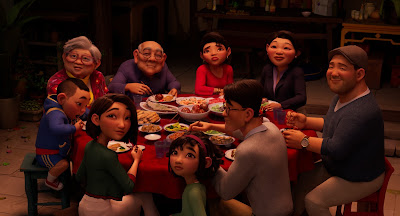 It was obvious that the movie came from a former Disney animator as almost every shot used one animation technique expertly in one way or another.  Colors were bright and vibrant.  2D animation was sprinkled throughout for a storybook feeling!  The eyes showed so much emotion (if there’s one thing the animator of the Beast knows how to do well, its how to animate eyes with great expression)!  It was all wonderful to look at and it’s a shame most will not see it in a format that allows the visuals to tower over them and be the immersive experience it should be.  A smaller screen will still suffice for everything else though.  The songs have a very Disney feeling to them but seem unlikely to be sung in the house for weeks (mostly because they’re almost all about death in some form or another).  The story itself is where the movie gets a little uneven. 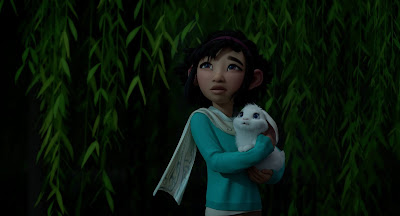 It involves a young girl whose mom dies when she is young.  Years go by and her dad is about to remarry and wants his daughter to stop believing in a legend about a princess on the moon, a legend which her mom told her stories about when she was younger.  Wanting to prove to her dad that her mother’s stories were true, Fei Fei decides to go to the moon and get proof of the princess who lives there.  Even though the trailer seems intent on spoiling the secrets beyond this point I will not.  Even if Netflix’s business model is to consume content and forget it a few days later, I must give Keane credit for trying to tell a more mature story than usual to kids.  He’s not entirely successful in what he wants to because he may be following the Disney formula he helped pioneer too closely, but I was amazed at how good parts of the movie were! 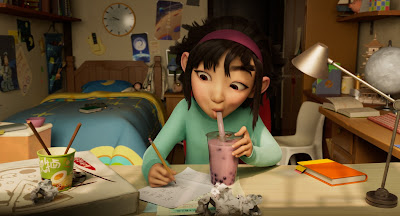 In particular, the beginning and end of the movie are very strong, and actually attempts to explain death and the healthy need to move on with your life in a mature way that even Disney failed to do sometimes.  The main problem is the middle section, which gets way too goofy for its own good and throws in an antagonist who has no business being an antagonist.  Sure, this was all done in Disney films, but I wonder what might have been if Keane had decided to make this a straight-forward drama instead.  Still, even the middle isn’t a loss, seeing that some of the best animation comes into play during that section, and if nothing else I watched “Over the Moon” with a sense that there was a vision for this the whole time. 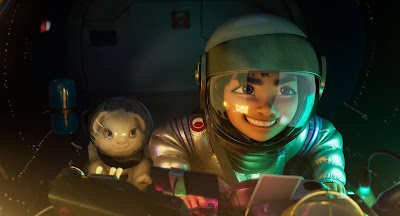 It is, at the end of the day, a test movie for Glen Keane.  A chance to give the man behind the drawing board a chance behind the camera, and he has made a serviceable film.  Not a great one.  Certainly not a classic.  Most will probably forget it if I am being complete honest with myself.  But it is a nice film.  It does have some genuine heart to it.  It shows the potential of Keane as not only a great animator, but a great director to boot.  Since it won’t have to be measured by box office numbers or any other arbitrary financial needs like that, I suspect Netflix will give Keane another movie to direct at some point.  They will give him a second chance, and I believe he will be more than ready to tackle the challenge the next time through and potentially make a classic!  “Over the Moon” is merely serviceable, but I suppose that’s okay; it’s on Netflix, after all.