It’s ironic that a company like Disney, who has been making “meta” movies for years, has now made one making fun of the shallowness of the concept. What’s funnier is that the new “Chip n Dale: Rescue Rangers” not only pokes fun at the whole idea of ‘meta’ being a shallow idea; it pokes fun at the whole reboot trend for being soulless, artificial, and not what people want. Yeah, you heard that: The Walt Disney Company – who’s made more money of movies off reboots and ‘meta’ humor than any other company I can think of – has decided that they wanted to produce a movie that takes on movie styles that have made them billions of dollars over the past several years! Maybe that’s why “Chip n Dale: Rescue Rangers” isn’t playing in movie theaters but is instead premiering on Disney+ where families will be able to watch it and make their own popcorn at home.

I don’t know what’s more depressing: the fact that they did this for a movie that reportedly cost $200 million dollars (almost the same amount of money Netflix spent on Martin Scorsese’s “The Irishman”) or the fact that the movie is good enough that it’s worth paying for. Yes, I’ve made it known in my recent reviews of “Doctor Strange in the Multiverse of Madness” and “Spider-Man: No Way Home” that I’m getting a bit tired of cameos, meta references, and storytelling that whose biggest emotional moments come from referencing stuff that I’ve seen ten, twenty, and THIRTY years ago! Doctor Strange running into a character from “Inhumans” (an ABC show that was cancelled after one season because no one liked it) isn’t storytelling and neither is Chip n Dale doing the Roger Rabbit dance with Roger Rabbit.

That said…it’s nice to see Roger Rabbit again. It’s nice to hear The Disney Afternoon song playing again. And while I am a little troubled that the foundation of “Chip n Dale: Rescue Rangers” is less about the caper itself than it is throwing in as many cartoon characters from the history of animation in as possible, it’s a fun ride and it’s clear that director Akiva Schaffer is making a movie he as a child would have likely LOVED to have seen! Heck, he’s such a fan of animation he even negotiated the rights to the original movie design of Sonic the Hedgehog and turned him into a character here! I’m not sure how much that cost, but it was worth every penny! I feel I’m more forgiving of what they’re doing here because while the mystery itself isn’t especially memorable or well written, it’s good enough to please the kiddos at home. 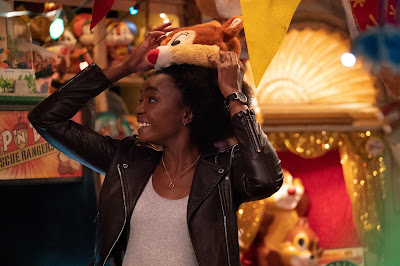 If parents have to watch this, they might as well have fun spotting all the cameos and adult references (some of which come from PG-13 and R rated movies it should be pointed out). And since the kids are going to watch it over, and over, and over again, parents will be happy to know there are so many visual jokes in the background it will take multiple viewings to catch everything. There’s a bit of an art to making a movie that pokes fun at meta humor and reboots while trying to be a successful reboot with meta humor in its own right. I’m not sure if they pull it off with the same success “Galaxy Quest” did, but it’s a more valiant effort than “Space Jam: A New Legacy.” Where they may have fumbled a bit is in being an adaptation of the TV show itself. Sure, “Chip n Dale: Rescue Rangers” involves Chip and Dale investigating the disappearance of one of their comrades.

Also, the movie references that the two were on a hit TV show that got cancelled in the 90’s (I hope I don’t have to say which one). Yet the villain is a secret for most of the film. The movie emphasizes the humor so much that the action is pushed to the side. Chip very rarely wears his Rescue Rangers costume. Heck, the Rescue Ranger gang doesn’t even do anything major as a group. Not to mention Chip and Dale themselves (with all due respect to John Mulaney and Andy Samberg) don’t act or sound like their counterparts from the TV show. In fact, fan favorite Gadget makes a mere cameo (and has a future that is truly NOT what I was expecting)! I’m sure some will message…no, some will tweet at me that the movie isn’t about Chip and Dale as the Rescue Rangers, but as Chip and Dale as actors on a show called ‘Rescue Rangers.’ Alright, I’ll go with that. That being said, I would have much preferred if the movie had been called something else. As an updated version of the Chip and Dale characters themselves the thing works beautifully. As an adaptation of “Chip n Dale: Rescue Rangers” the TV show it fails miserably, and I hope fans of that show get the actual movie adaptation they were promised when the project was first announced.

In conclusion, “Chip n Dale: Rescue Rangers” is a wildly entertaining movie that does too many fun things with its ‘meta’ universe that I couldn’t help but enjoy it. I’m still not sure what it says about entertainment as a whole that Disney decided to (once again) remind everyone of all the things they’ve made in the past rather than make the adaptation I feel most fans would have preferred. I’m also not sure how I feel about them spending so much money on such a cinematic film only to give it away for free. They made a gem of a movie and are treating it like something disposable by doing this. In terms of the grade scale…well, this is better than previous adaptations like “Underdog” and “Inspector Gadget” but not as good as “The LEGO Movie.” Course, this isn’t an adaptation either…it’s more like Disney’s version of Shrek. On that level, I suppose a B- grade should suffice. Maybe that’s a silly way to grade a movie, but a silly movie deserves a silly grade.