If you need an example of how crazy this whole sequel/reboot craze is, I offer you dear readers this bit of trivia: I was just 1 year old when Tony Scott’s “Top Gun” was released in theaters. Some of you may find that fact amusing while some may question why such a fact would be brought up at all. Is there something special about the year I was born? Should Hollywood base their decision to make a sequel on a movie that was a major milestone in the 80’s on my birthday? No, I don’t share this fact out of any narcissistic mentality. I bring that up because now I’m 37 years old. My wife is the same age as the first movie is. Is there a sane limit to how long you should wait to make a sequel? Is there even an audience for “Top Gun: Maverick?” To answer the second question, we’ll have to wait for the box office results. Personally, I couldn’t fathom this film being a huge success unless the movie flew off the screen and delivered something great that audiences hadn’t seen since…well, “Top Gun” in 1986. 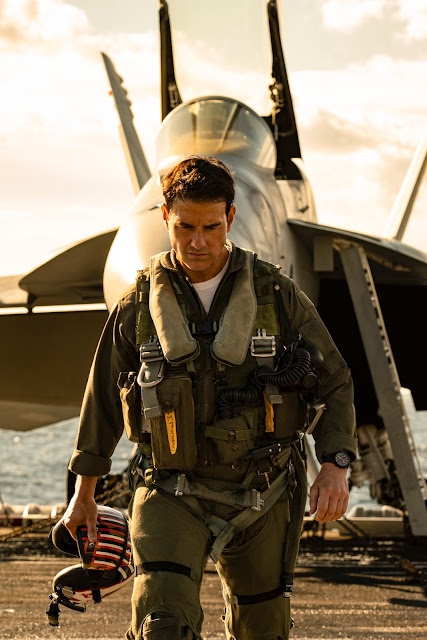 Now aside from the fact that I am referencing a movie that is one year older than I am, I am also in a precarious situation in the fact that I actually am not a huge fan of “Top Gun.” And when I say I’m not a big fan I’m more of the mindset that “Top Gun” is not a very good movie. Although I’ve listened to the iconic soundtrack many times throughout the years like most people, judged as a movie as opposed to something that somehow managed to become popular, “Top Gun” is two hours of cliché male cheese. You know how guys complain about ‘chick flicks’ because of the obvious beats to the acting, cliched storytelling, and over-reliance on good looking actors that usually are better in other movies? Well, I hate to tell you this, but these types of movies exist for guys too, and “Top Gun” was for men what “Dirty Dancing” was to women. 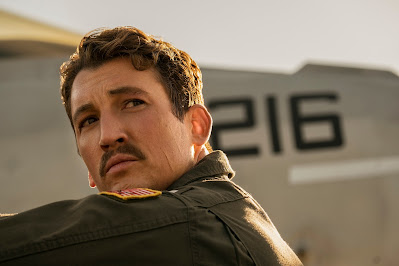 Both movies are objectively bad, don’t really advance the art of cinema, but have soundtracks that are so good you may be blinded into thinking they have something artistic to offer. Granted, I hold no ill will towards people who like them (both movies are more worthy of your time than the recent cinematic masterpiece “Cats”), but let’s not kid ourselves into thinking these were good films; they scratched an itch audiences were craving and they scratched it just enough to fool us into thinking we were watching something decent. When “Dirty Dancing” got a sequel in the form of “Dirty Dancing: Havana Nights” (as well as a three-hour remake in 2017 starring Abigal Breslin that most of you probably didn’t know about) it highlighted just how bad the whole franchise really was. That Tom Cruise wanted to come back for “Top Gun: Maverick” almost seems like career suicide. Sure, sequels are a huge thing now, but how good could a sequel that’s almost four decades late actually be?!

Turns out “Top Gun: Maverick” could be pretty damn good.

With all due respect to the late Tony Scott, what director Joseph Kosinski was able to do here is nothing short of a miracle. Kosinski is a director who has largely been directing special effects vehicles while he waited in the background, biding his time to shine. Films like “TRON: Legacy” and “Oblivion” (also staring Cruise) were major hits because they were fun, stylish films, but neither one brought much attention to a talented film maker waiting in the wings. His previous film “Only the Brave” likely would have made him a star had the film been a success. It may have taken more than twelve years to have a movie worthy of his talents, but “Top Gun: Maverick” will hopefully be the game changer for this man’s career he most certainly deserves. What he has delivered is a film that is not only MUCH better than the first film, but also is one that is so confident and stunning that it makes the first film look like the joke that it is! 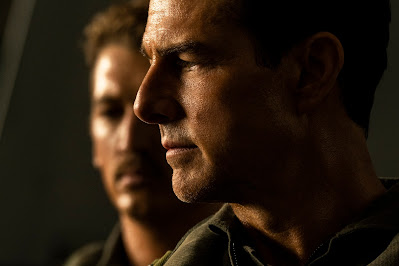 One of the aspects that people liked with the first film were the arial shots of the jets flying in the air. Those action sequences were made using lots of long shots with the occasional cockpit view of Cruise and Anthony Edwards. The illusion of Cruise being in the air was there…but ultimately, you could tell these scenes were staged. This time though the cameras are in the sky with the actors. In many shots IMAX cameras were put in the jet’s cockpits, which not only heightens the tension of the flight drills themselves, but also shows off Tom Cruises amazing flying capabilities. At least…I THINK that’s Cruise who’s flying the planes?! Honestly, it’s difficult to tell if Cruises flights are legitimate or if there is some special effects wizardry going on here. Common sense would dictate that many of these scenarios are just special effects, but the movie does star a man who was willing to hang from the side of a plane for a cool action sequence in the last ‘Mission: Impossible’ movie, so I suppose anything is possible in this case. 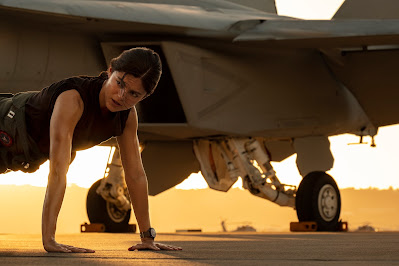 Regardless of how the scenes were shot, it doesn’t change the fact that these are some of the best action sequences the struggling cinema has seen since “Mad Max: Fury Road” burst onto screens seven years ago! They are confident, filmed with grace, and so totally immerse the audience that we feel we are having an ‘out-of-body’ experience while watching them! When the movie isn’t performing amazing stunts in the sky, its telling one heck of a story on the ground. It turns out that my concern about this sequel arriving 36 years too late is actually that of a movie that’s arriving 36 years on time. I went into great detail about the cliches of the first “Top Gun” earlier in this review for a reason: Because as much as people may like that movie, it is horribly immature in its film making and terribly juvenile in its screenplay. It’s akin to watching old videos of you in college and being amazing that you ever considered the way you acted ‘cool.’ 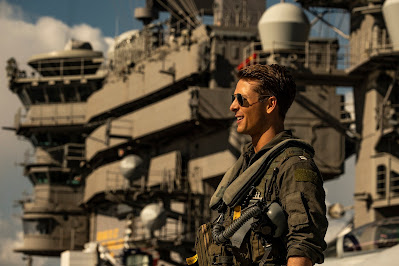 “Top Gun: Maverick” comes along and is an older, wiser film. One that not only perfected the skills of a great action film since the first go around, but also has learned a few lessons. Cruise’s Pete “Maverick” Mitchell in this film is no longer the cocky young man of the 80’s. Now, he is a middle-aged man who was never able to figure his life out. He still has the skills and he’s still cocky enough to take risks, but his life effectively went nowhere, held back by the pride in the skills he knows he has and crippling fear he has of that pride and knowing the consequences that could have. He will have a second chance in life when he is called back to Top Gun to train a group of young men and women to fly an impossible mission (no joke will be inserted here) and destroy biological weapons. One of these pilots is Bradley “Rooster” Bradshaw (Miles Teller), the son of his best friend ‘Goose’ from the previous film. 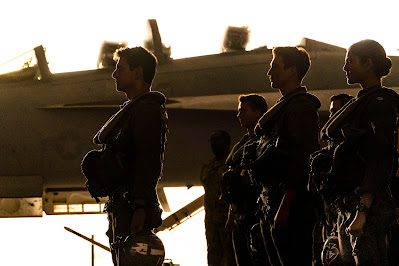 Those who saw the first film may remember that Goose was tragically killed in an accident that could have easily been avoided had Maverick not been so reckless in the air. Those who haven’t seen the first film won’t need to see it to understand the conflict: “Top Gun: Maverick” does such a great job organically incorporating the recap into the screenplay that I personally wonder if there’s even a reason to watch the first one now? Why, Kenny Loggins “Danger Zone” is even played, so that removes one more reason to go back to the first movie, so you still get your iconic music sequence! Keep I mind, I’m not saying to forget “Top Gun” exists: It happened. It wasn’t very good in my opinion, but it’s clear it left a mark on the world and maybe some people don’t mind looking back to their embarrassing college days. 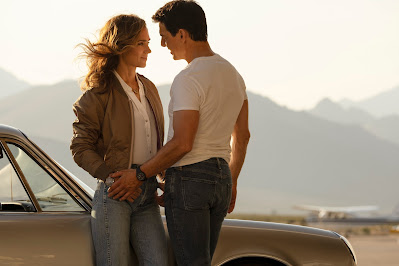 Yet “Top Gun: Maverick” is such a vastly superior film – from the storytelling, to the characters, to the action sequences themselves – that going back to the first movie almost seems sad. Kosinski really has delivered a masterpiece here. In the same way that “Top Gun” defined a generation of summer movies back then, so too will “Top Gun: Maverick” define a generation of summer movies now! It’s already flown circles around the first film from a technical level. Aside from that though, I believe audiences will walk away from this movie feeling genuinely moved by the story playing out in front of them (especially during one scene where Val Kilmer makes an emotional return as Iceman). It also should be said (though this is likely less surprising), but Tom Cruise still commands the screen like few actors out there, and his maturity as an actor has been a treat to witness growing up. “Top Gun: Maverick” is one of the best films of the year (and if someone wants to give “Dirty Dancing” another shot I’m much more agreeable to that idea now)!