"Avatar: The Way of Water" Review

When I was a young teen, my dad brought me to see James Cameron’s “Titanic” in a movie theater. Though the film had been out for months at that point, after winning a dozen or so Oscars I was able to convince him that it would be worth taking me to the theater to see. I suppose the hesitancy on both our parts was the over three-hour running time, but at some point, you just have to see what the big deal is about. I watched the film with my jaw dropped as I realized that “Titanic” is what made me love going to the movies. There was a size and scope of the film that you simply couldn't get on a TV screen at home, and for me, this was a film that would be an insult to experience at home for the first time. 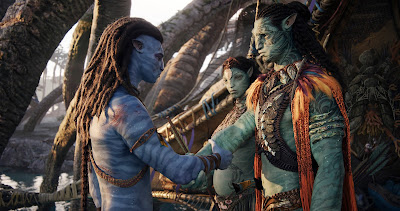 In many ways Cameron keeps doing this as my experience with “Titanic” can just as easily be applied to “Avatar: The Way of Water.” While it would be ignorant to say that the ‘death of the movie theater’ discussions hasn’t always been in the background, Hollywood is going through a scary time when many major movie stars are making TV shows and direct-to-streaming movies. “CODA” – a family drama from Apple that was primarily streamed on Apple TV+ last year – became the first movie made primarily for a TV audience to win the Academy Award for Best Picture. If you are a box office pendant it will not be lost that many adult dramas (including Steven Spielberg’s latest effort) are losing money in theaters, with audiences preferring to stream them at home. 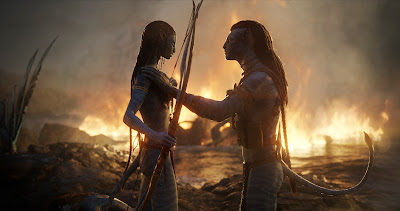 In many ways, it feels like after the COVID-19 pandemic uplifted our lives the movie theater business is struggling to stay alive. The good news is we have auteur filmmakers who love the theatrical experience and doing everything in their power to keep it alive. While Christopher Nolan failed in his noble attempt to revive theater attendance with “Tenet” two years ago we now have ‘The King of the World’ himself stepping up to the plate with a sequel to the most successful film of all time (for more than a decade anyway) hitting regular theaters, IMAX, and every premium format you can think of. Why it’s even bringing excitement back to 3D movies in a way that we haven’t seen in a long time! 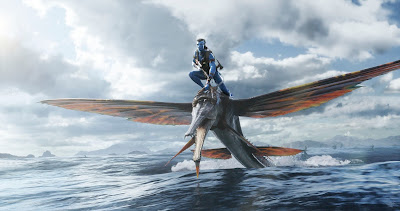 Coming out more than ten years later was the movie worth the wait? Is it a worthy challenger as the new highest-grossing film of all time? Is the story more complicated? While on the surface it may seem fair to ask some of these questions, I feel doing so completely misses the point. Much like I reviewed the original “Avatar” without the hindsight of it making over $2 billion dollars, I must look at “Avatar: The Way of Water” as a movie experience alone and not a potential multi-billion franchise for Disney. And yes, it is true that I have seen movies with better screenplays. I have seen movies with far more complex characters. I will even begrudgingly admit that maybe, just MAYBE, the way everything plays out is a tad predictable! 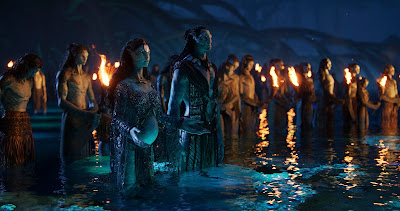 So why the five stars? Why am I putting myself up to a bunch of “’Avatar’ wasn’t that good” emails again? For a simple reason: because as a film experience there is no topping “Avatar: The Way of Water!” In a year where “Top Gun: Maverick” reminded audiences of the thrill of going back to the movies so too does “Avatar: The Way of Water” remind us of the beauty that the theatrical experience provides. It was shot in High Frame Rate IMAX 3D, and this is the format you must see it in (if you are on a budget, your standard RealD presentation will do). Inside this over three-hour movie are some of the best visuals and cinematography you will see in your entire life. 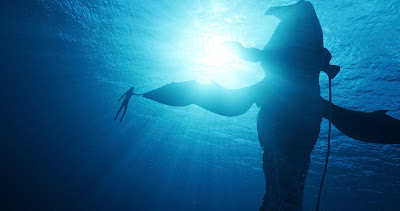 Pandora (already a world beaming with imagination) is brought to life in ways that dwarf even the first film. We discover there are different races of the Navi that exist. There are different tribes with their own religious beliefs and history. While the previous film was spent exploring the trees of Pandora, this one (as the title suggests) brings us into the ocean, where we are immersed in the film as if we were scuba diving into another world. Turns out the oceans on Pandora may contain more beauty than the land itself, and even Jake Sully (Sam Worthington) and his Navi wife Neytiri (Zoe Saldana) are amazed by the world under the sea! 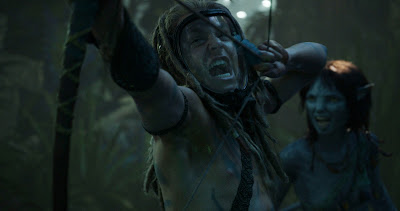 As I sat and watched I knew I would be watching this film several times in movie theaters. Even if 3D TVs made a comeback next year, there is no way to replicate this experience at home. James Cameron is the master of creating experiences you can’t experience on your couch. When movies came to home video, he shot in 2.35:1 widescreen to emphasize the size and scope of his films. When widescreen TVs came along, he decided to shoot in 3D. When 3D TVs came to the market (however briefly) he decided to experiment with High Frame Rate. When we do get the third and fourth Avatar movies (as I’m certain we will) I can’t help but wonder what he will do to excite us once more?! 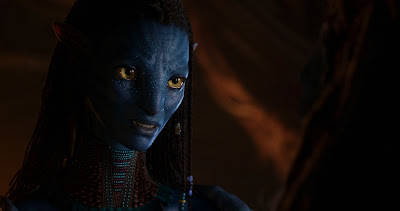 A regular review cannot do justice to “Avatar: The Way of Water” because there simply is nothing else like it out there. The worlds that are created must be experienced to be believed. The pace of the film is so brisk you can understand why Cameron didn’t want to include an intermission. It is an out-of-body experience that you simply will not get if you decide to wait and stream it on Disney+. I know the tickets for this experience aren’t cheap. I also am aware of how easy it is to stay home when streaming offers so many options. Here’s the thing you must remember: streaming is TV. “Avatar: The Way of Water” is cinema, and it is great cinema at that! The difference is so vast it’s like comparing a postcard of a Van Gogh painting to the real thing; it just doesn't compare.